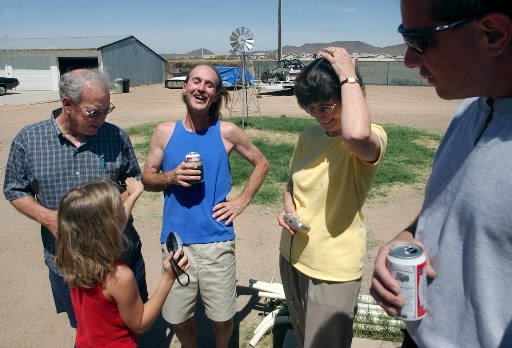 Ray Krone was the 100th exonerated death-row inmate. A new book tells about his time in court and prison. Here, he jokes with his mother, Carolyn Leming, and step-father Jim Leming, in Phoenix in 2002 shortly after his release.

A year ago (2005), Ray Krone revealed his Extreme Makeover to his family, friends and the entire country.
The nation’s 100th exonerated death-row inmate had been wrongly convicted twice in the 1991 murder of a Phoenix barmaid.
He became known as “the Snaggletooth Killer” because experts said his ragged teeth matched a bite mark found on the victim.
The ABC TV show “Extreme Makeover” gave him a makeover — including new teeth — to erase that image.

Jim Rix was talking with his mother on the phone in the early 1990s about a television show in which an innocent man had been released from death row, when she shared some surprising news.
“You have a cousin on death row, and he’s innocent,” his mom said.
Rix thought that he had misheard. But she explained that her niece’s son, Ray Krone, had been convicted in the 1991 murder of a Phoenix barmaid. Krone’s teeth allegedly matched a bite mark on the woman’s body.
At first, Rix was skeptical of Krone’s innocence. His mother had only heard what her niece told her, and Krone had been convicted by a jury.
Rix wrote his cousin, whom he had never met. Krone responded, explaining his case in detail and saying he couldn’t believe he had been convicted.
Rix pored through the trial transcripts and consulted with a bite-mark expert, who excluded Krone as a suspect.
“Because the bite mark was the only substantial evidence against him, I was all but convinced that his conviction had been a mistake,” Rix wrote in his new book, “Jingle Jangle: The Perfect Crime Turned Inside Out.”
It would be the start of a long journey for Rix, who along with others worked with the family to free Krone.
The 468-page book, which has been in the works since Krone’s second trial in 1996, will be coming out next month. Written from Rix’s perspective, it covers his initial discovery of his cousin’s case, Krone’s second trial and his release from prison.
“It’s really Ray’s story and my story about what I learned about the criminal justice system,” Rix said in a phone interview from his Nevada home.
Krone and his family have read chapters of the book but have not yet seen the final product. They are happy for Rix, and they hope that this pursuit will be as successful as the one to free Krone, said Carolyn Leming, Krone’s mother.
Krone, who lives in Dover Township, said he hopes the book will open people’s eyes that there are mistakes made in the justice system.
People often think “good, they got him” when a suspect has been arrested, Krone said. But a rush to judgment can lead to mistakes, and jurors must hold prosecutors and police to the highest level in proving a case, he said. A person shouldn’t be convicted unless there is evidence of guilt beyond a reasonable doubt.
“Bad things do happen to good people,” Krone said.
Rix said he and the others who worked to free Krone knew the only way to do it was to prove who committed the crime.
It was DNA evidence that cleared Krone and implicated another man: Kenneth Phillips, who pleaded guilty last year to Kim Ancona’s murder.
Rix said he hopes that the book will help prevent innocent people from being convicted.
“I hope in some ways it will help others that are in Ray’s situation,” Rix said.