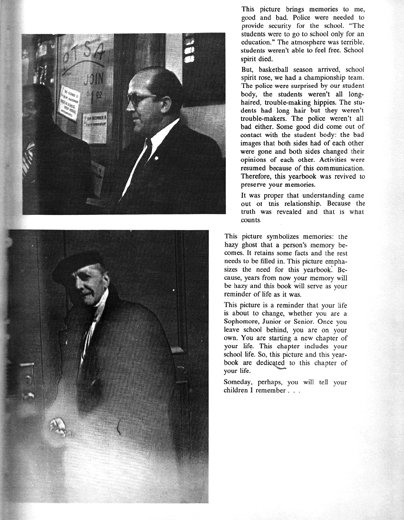 The 1971 ‘Tatler’ of William Penn High School tells about how city detectives (top photograph) were assigned to the school, and student views about that action. Also of interest: York Charrette or Charade?

In response to the slayings of children in Newtown, Conn., former Yorker Ken Rohrbaugh, residing in Lakewood,Colo., sent an insightful email with an attachment from the 1971 William Penn High School yearbook.

Noticing the post-Newtown call for armed police in every school, Ken noted that York High had law enforcement officers as early as 1970 and 1971.

That was in the aftermath of the York race riots, when things were shaky around York. Those riots struck in the summers of 1968 and 1969. The York Charrette, a type of group civic therapy, is sometimes credited with improving the racial scene in York.

Right before the Charrrette convened,  violence hit York High in 1970, as this post indicates: School violence struck York County in 1970.

At first, the presence of city police quelled school spirit, according to the “Tatler.” “The atmosphere was terrible. Students weren’t able to feel free,” the yearbook stated.

But before year’s end, both students and police got to know – and understand – each other.

The publication of the yearbook is an example of the restoration of school spirit, the “Tatler” stated.

Forty years later, school resource officers, as they are called, are common in high schools around York County.

Thanks to Ken for bringing this to our attention, a moment when good and bad come together. And understanding is the result.

“(N)ow 40+ years later, should be plenty of folks in area who remember,” he wrote.

Also of interest
Journal tells all about the York Charrette of 1970.