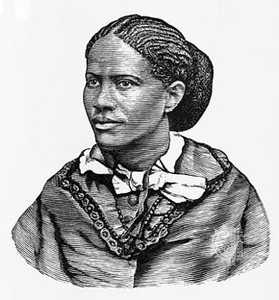 Baltimore native Frances Ellen Watkins Harper, 1825-1911, received $20 a month for teaching school in York, Pa., in the early 1850s. She is remembered today as an abolitionist and suffragist.

Before York, Pa.’s Glenalvin Goodridge (topic of many recent posts here) was a pioneering American photographer, he was a school teacher.

And after Glenalvin Goodridge was a school teacher, Frances Ellen Watkins Harper came to town.

She became a leading black American poet and anti-slavery advocate.

Today, visitors to the African American Museum in Philadelphia can get a full-size glimpse of her fire and passion against slavery… .

She is one of 10 trailblazers from 18th- and 19th-century Philadelphia in the “Audicious Freedom” exhibit.

Here’s the museum’s website’s description of this captivating exhibit:

The figures are actually full-size video projections, patiently waiting for a visitor to approach and actively engage them… .  These speakers create an atmosphere similar to a genteel cocktail party, with each dialogue clearly understandable and undisturbed by additional visitors exploring the stories of other agents of change.

The museum is filled with other interesting exhibits including “Free to Be,” exploring African Americans in Paris in 1900-1940.

That exhibit includes singer Marian Anderson, who performed in York in 1941.

Back to Francis Watkins:

She observed the Underground Railroad operating in York.

Here’s the description from my “Almost Forgotten”:

“I saw a passenger per the Underground Railroad yesterday; did he arrive safely? Notwithstanding that abomination of the nineteenth century – the Fugitive Slave Law – men still determine to be free. Notwithstanding all the darkness in which they keep the slaves, it seems that somehow light is dawning on their minds.”

See the poetry that such a scene spawned at: Woman engages in anti-slavery movement with poetry.

It’s well worth the time and $10 to visit the African American Museum in Philadelphia.

And there’s a major opportunity to add to your understanding of the Civil War by visiting the Pennsylvania Civil War Road Show from 9 a.m. to 5 p.m. today and Sunday at York’s Penn Park.