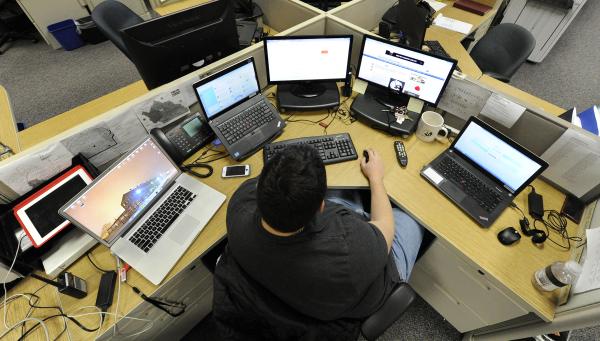 ‘Will Someone give @ydrcom journalist @ChinskiTweets a bigger desk? He needs more monitor space! #partylikeajournalist,’ someone at the York, Pa., Daily Record said in a tweet about colleague Anthony Machcinski. This scene gives a sense of the importance of technology in the news gathering process. The only typewriters around at the YDR are on exhibit in an office. (See below). Also of interest: GameTimePa.com crosses the Susquehanna and expands to the Pa./N.J. line.

A large convention room at the Hershey Lodge was abuzz with the laughter and delight from scores of youngsters last week.

But last week, this room was filled with futurist Star Wars figures entertaining youngsters who are carrying smartphones (or soon will be) that exceed the computing power of even the largest of the computers at that technology show in 1995.

The technological tools offered to the York Daily Record/Sunday News and other news organizations who attended are designed for mobility and pack enough smarts and horsepower to run Darth Vader’s mobile life support system.

So as conferencegoers strolled the aisles of a convention room on the other side of the Hershey Lodge Conference Center from where the Star Wars characters were entertaining, they viewed tools primarily the size of laptops, iPads and smartphones.

The conference has transformed from a print to a digital conference. The York Daily Record’s industry – the news business – is  racing toward meeting the hunger for news and information that those youngsters across the hall will demand in a couple of years.

We’ve long since lost a sense that we are just a newspaper. The Daily Record produces content for distribution to readers across a variety of what we call platforms  – mobile, Web and social media sites.

A newspaper is one of those platforms – a very important platform. But newsprint no longer the only way to deliver news content.

All this sounds complicated – and it is.

The way news is delivered has changed – from print to digital. But the business model for the news industry is largely the same.

Newsrooms gather stories that attract an audience. That audience has value to advertisers, who pay for this access.

In 1815, the York Gazette, forerunner to the York Daily Record, published a newspaper to provide stories and notices to a growing audience of English-speaking Democrats in York County. That audience grew, and particularly and not surprisingly so among the Democrats, the dominant political party.

That audience became desirable for early 19th-century advertisers, primarily the Democratic Party and its adherents, to get out its news to its constituents.

Since then, news organizations have lost their political party organ function and created audiences of all parties or no parties.

That’s when the York Daily Record launched its website in the middle of that terrible winter blizzard, making YDR.com one of the earliest sites in Pennsylvania.

Since then – and particularly in the past 10 years – the York Daily Record newsroom has been gathering news that is attracting audiences on an array of digital offering.

For example, looking at just one platform, the YDR’s Facebook audience of 44,000 fans is within range of our daily newspaper circulation in 1996.

And advertisers are taking advantage of those audiences by increasingly placing their messages on these digital media.

Panelists at one America East presentation agreed with a point we often make at the York Daily Record.

A news story has more readership than ever before. That story can be read in the newspaper, and on the Web, social media and in news apps on smartphones.

Those youngsters across the hall enthralled by those Star Wars characters probably won’t read a newspaper.

But the York Daily Record will be there to deliver the news to them in the way they prefer to receive it. 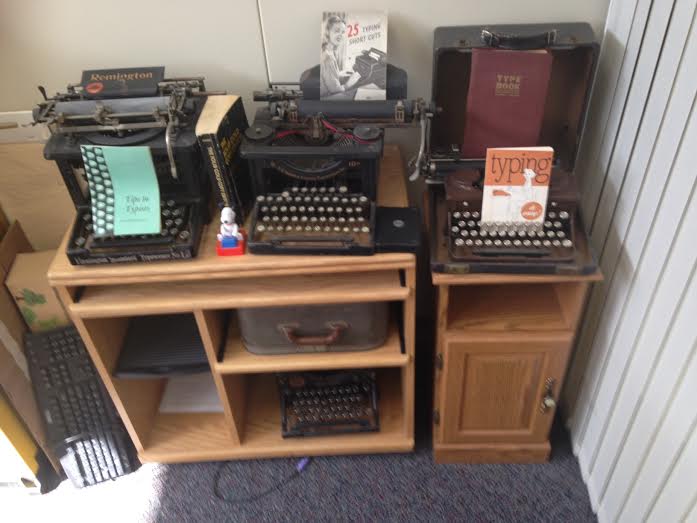 This display of typewriters sits in YDR Managing Editor Randy Parker’s office. Despite the range of makes, it was customary for journalists to place only one on their desks. The past tense is right. These unused typewriters on exhibit are the only typewriters in the YDR’s office. Notice that a modern keyboard and computer cable made their way into this exhibit. Also of interest: Newspaper’s founding date remains a mystery.