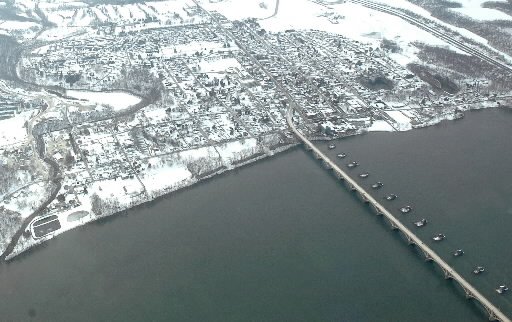 The National Park Service’s Underground Railroad Network to Freedom has added another Lancaster County site  to its roster. The remains of the Columbia/Wrightsville Bridge, seen upriver from the Veterans Memorial Bridge in this photo, are part of this approved list. Ruins of the locks and dam of the Pennsylvania Canal, on Columbia Borough-owned land north of the Rt. 462 bridge, are also part of the list, according to historical consultant Randy Harris. This aerial photo is looking west toward Wrightsville on the York County side of the Susquehanna River. Also of interest: Plans for Veterans Memorial Bridge moving along.

That’s the most of any county in the state, according to historic consultant Randy Harris, who coordinated the application.

York County appears twice on the Network to Freedom’s list: the William C. Goodridge House and the Willis House.

The Network to Freedom website explains that the initiative seeks to coordinate preservation and educational efforts and then “integrate local historical places, museums, and interpretive programs associated with the Underground Railroad into a mosaic of community, regional, and national stories.” So not all designations are actual Underground Railroad sites.

The most recent Lancaster County designation includes those abutments, sans bridge, crossing the Susquehanna, plus ruins of locks and other infrastructure from the old Pennsylvania Canal in Columbia. One of the three bridges to sit on those abutments was the mile-long covered bridge that Union forces burned to stop the Confederate advance in the Civil War.

Most of the Susquehanna River is counted in Lancaster County, so that older county gets the “rights” to this particular project.

Such coordinated efforts are lacking in York County.

One project that could be boosted is the completion for public viewing of the home of ex-slave and 19th-century businessman William C. Goodridge. The East Philadelphia Street project has promise as a draw for local residents, tourists and historians with its cellar that is interpreted as a place for hiding fugitives. Funding is badly needed to complete the project, set back some years ago by water damage.

Interest and research in the Underground Railroad is growing in York County.

York native Dorothy King highlighted a York County family and Underground Railroad site in her recent production: “Susquehanna to Freedom: The Role of the Susquehanna River in the Underground Railroad.” Former slave Amanda Berry from Shrewsbury is one of the characters portrayed in the PennOwl Productions drama.

A historical marker in Shrewsbury explains Berry’s achievements, and Berry wrote about her family’s involvement in the Underground Railroad. So Berry’s life and times would seem to be a place to start in placing a third York County project on the Network to Freedom list.

“There’s not a lack of material and stories to tell, but it’s also a matter of how much stamina people have,” Harris told the York Daily Record/Sunday News. “The two counties could easily have enough sites to plan an two-day tour if we wanted to cover that territory.”

A more aggressive, coordinated approach in documenting and applying for Underground Railroad designations would seem to rest with the York County commissioners.

Perhaps the key in cracking the code would come by enlisting the expertise of Randy Harris.

The Columbia Historic Preservation Society credits Harris with gaining, directly or in collaboration with other experts, the designation for 20 of the roughly 50 sites in Pennsylvania on the Network to Freedom list.

Why are such designations important?

They signal to York County residents, tourists and the world that, to borrow a Preservation Pennsylvania slogan, “This Place Matters.”

Lancaster County projects in the NPS program, according to Randy Harris:

Check out these stories and photographs about the Underground Railroad in York County.