Photos of Statue of Liberty, Woodstock and other historic dog day events 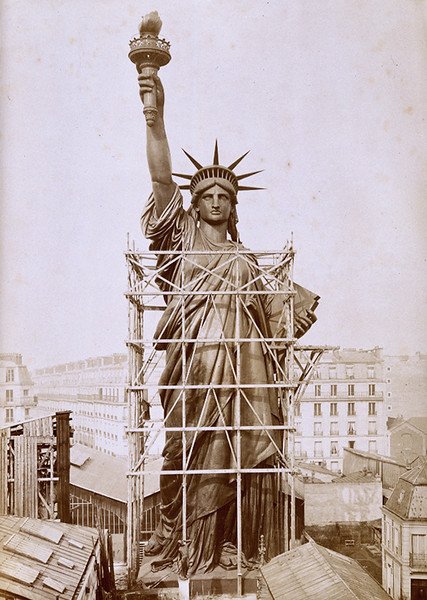 August has seen its share of major historic events in America, and this ydr.com Media Center site lists a bunch of them – Woodstock, V-J Day and the cornerstone of the Statue of Liberty being anchored to the ground. This description accompanies the 30-plus Media Center photos: ‘1884 – The cornerstone for the Statue of Liberty is laid on Bedloe’s Island (now Liberty Island) in New York Harbor. The Statue of Liberty (Liberty Enlightening the World) is a colossal neoclassical sculpture on Liberty Island in the middle of New York Harbor, in Manhattan, New York City. The statue, designed by Frédéric Auguste Bartholdi and dedicated on October 28, 1886, was a gift to the United States from the people of France. The statue is of a robed female figure representing Libertas, the Roman goddess of freedom, who bears a torch and a tabula ansata (a tablet evoking the law) upon which is inscribed the date of the American Declaration of Independence, July 4, 1776. A broken chain lies at her feet. The statue is an icon of freedom and of the United States: a welcoming signal to immigrants arriving from abroad.’ Also of interest: The Media Center has local galleries of historic photos: Check out these images of stained glass windows in York County.

So, we recently put up our 3,000th post on this blog, York Town Square.

It’s hard to tell which one gained the marker because there are partial and unfinished posts in the count, but we do know the first one – York County journalism goes back to the future – way back in September 2005.

Comment about what works – or needs work – welcomed. Hope to keep up this daily pace, as long as you’re reading. That happening to the tune of 300,000 pages a year.

Most gratifying is the engagement – your questions and comments. When you combine commenting on here, Facebook, Twitter etc., I sometimes have trouble keeping up. But I always particularly love comments on here.

Best of blogs: Buffy’s World brings together several links under the topic: A new way to see York’s Central Market.

York County’s Mack’s, those iconic ice cream stands. Which has best ice cream? They’re all great. But Bill Mack’s near Dover, is up there. This, for $3. And that pretzel! More about original Mack’s: Mack’s is short for McDaniel’s, but in York County it means ice cream .