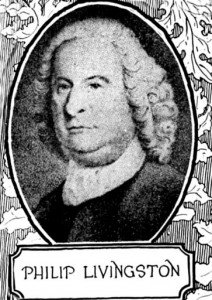 Philip Livingston is one of two Declaration of Independence signers to be interred in York County. His marker stands in Prospect Hill Cemetery. The monument for the other signer, James Smith, rests in the First Presbyterian Church’s Cemetery. This painting of Livingston, exhibited from time to time at the York County Heritage Trust, came as part of the 150th anniversary of the adoption of the Articles of Confederation in 1927. It was posted outdoors, in Continental Square, with 15 other paintings. Background post: Declaration signer James Smith gains moment of fame.

So we find that a plaque feting Declaration of Independence signer Philip Livingston is available for public view in York’s Zion United Church of Christ. And his tombstone stands in Prospect Hill Cemetery.
But that’s small recognition for a member of one of America’s most powerful families – a venerable family perhaps with fame and fortune comparable to the Kennedys today.
The delegate from New York was not feeling well in the days before his departure to York in 1778. In fact, it was believed he would not return to his native soil.
Here’s what happened in York, excerpted from “Nine Months in York Town”:

Henry Philip Livingston, second in command of George Washington’s Guard, traveled from Valley Forge to York Town to visit his father, Philip, a delegate from New York.
He found Philip in great pain, suffering from a stomach and bowel disorder. His illness had confined him to his room almost since his arrival in York Town in early May.
Gouverneur Morris visited Livingston and described the symptoms to statesman John Jay back home:
“This I gather from a quick Pulse, Languor, continued sickness, some Pain and much uneasiness about the Part I suppose to be affected (stomach), a Decline of strength & Flesh, Hectic appearance.”
Philip died in the early morning of June 12 and was buried that evening. He was 62 years old.
Henry inherited the responsibility for sending the news of the Declaration of Independence signer’s death to the extensive Livingston family.
Meeting that day, Congress resolved that, “Congress will, in a body, attend the funeral of Mr. Livingston this evening, at six o’clock, with a crape round the arm, and will continue in mourning for the space for one month.”

Patriot Robert Morris heard the news in Valley Forge. He wrote to Gouverneur Morris of New York: ‘Poor Phil Livingston. I am sorry for the loss of so Honest a Man & hope deserving respect has been shewn to his Memory.”