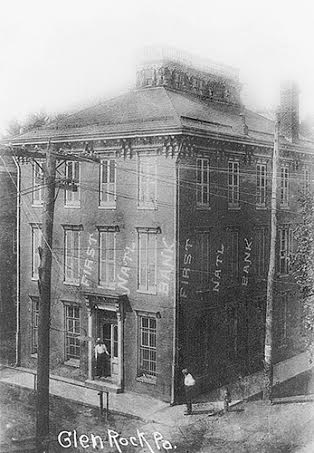 For decades, it was known as the First National Bank of Glen Rock, but it evolved into the York County icon, PeoplesBank. The bank has expanded beyond its Glen Rock, Pa., home to offer 20 branches in southcentral Pennsylvania and Northern Maryland. The bank’s headquarters stands on slightly higher ground today, 150 years after its founding. It is has moved from the Glen in the Rocks to Leader Heights in York Township. Also of interest: Books about Glen Rock abound, and there’s a lot to write about. 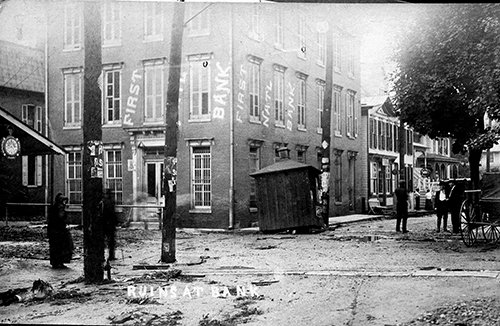 First National Bank occupied this building – constructed by Nathaniel Z. Seitz – in 1876. Before that, it had operated since its founding in June 1864 on the second floor of the Emanuel Sheffer building on Main Street. Notice the signage painted directly – and diagonally – onto the brickwork. A Glen Rock history gives this insight: ‘After 1910, the Board began to discuss how the bank would move forward. The Bank was outgrowing its offices on the corner of Manchester and Hanover Streets, and the condition of the building had deteriorated over the years.’ A flood in 1911, its aftermath shown here, might have expedited this deterioration. The bank’s board opted to tear down the 1876 building and put up a new one. 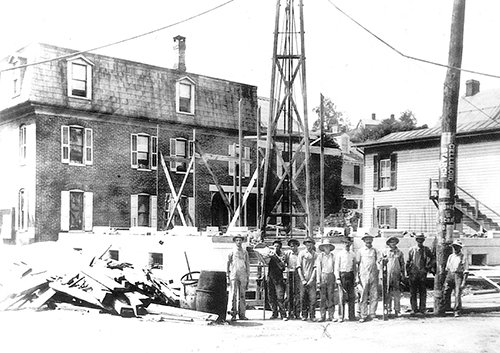 First National’s building was razed in 1912, and a familiar structure went up on its old footprint, dedicated later that year. According to the Glen Rock history, here’s  a report from the April 1912 ‘The Glen Rock Item’: ‘The First National Bank moved Saturday April 20, into temporary quarters in the Miller and Cramer building on the corner of Baltimore and Main Streets. These quarters will be occupied during the building of the new banking house on the site of the building vacated. Razing of the old building is being done by H. L. Gemmill. The building committee consisted of Joseph Dise, Paul J. Beck, N. K. Seitz, and George W. Geiple. The plans and drawings for the new building have been made by Joseph Dise.’ 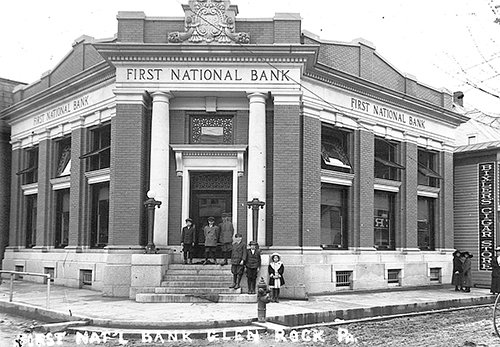 This is the bank’s building, a Glen Rock landmark today, in 1914. For decades, Glen Rock was the home of two banks – PeoplesBank and Glen Rock State Bank. This speaks to the relative prosperity of the Glen Rock community that stood on a short list – with York, Hanover and Red Lion – of leading industrial towns in York County. The old building has endured for more than 100 years. It could be a museum and tell the story of its hometown. Actually, it does serve as such. Its second floor is a community museum operated by the Glen Rock Historic Preservation Society. Also of interest: This time, Glen Rock entrepreneur bet on the wrong horse.

Plus a bonus photo: 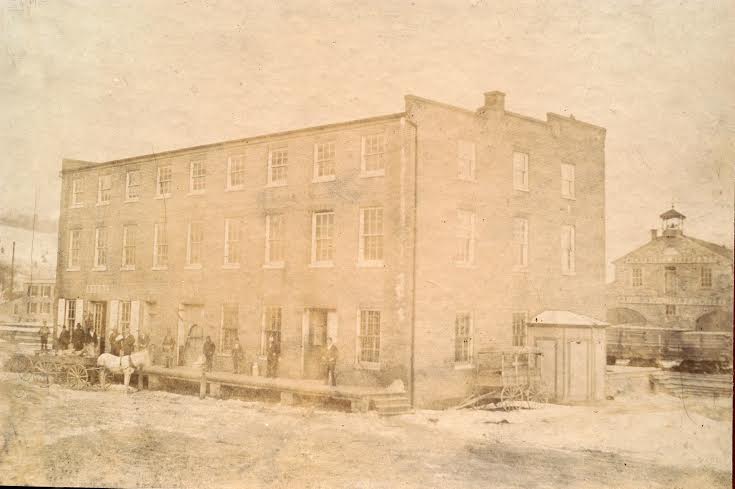 Here’s the Emanuel Sheffer building, home of the bank for its first 12 years.

Also of interest:
These stories and photos tell about Glen Rock.