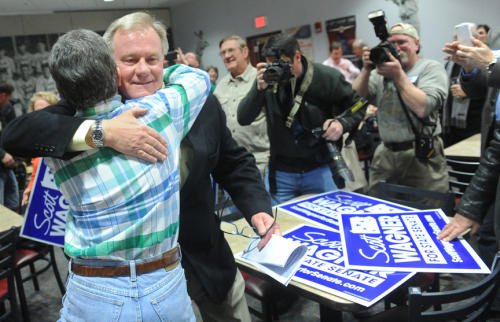 Scott Wagner is the latest York countian to make statewide political news after voters wrote him in to victory in a special election for a Pennsylvania Senate seat that covers most of York County. York, Pa., has seen several of its politicos gain high state rank in recent years. Also of interest: Check out these stories and photos about politics in York County’s past.

We’ve known for years that all roads lead to York and that the county is the center of the universe.

That didn’t always seem the case when it came to politics.

Oh, there have been some Supreme Court justices and a few other cabinet members. And when George Leader was governor in the 1950s, other Yorkers were there with him. For example, Henry Leader served as his brother’s legislative aide and Herbert Cohen, attorney general.

But all those school field trips to nearby Harrisburg have only occasionally paid off. The cynic might say that York County’s proximity to political wheelers and dealers in Harrisburg caused people swear off state politics.

So our long history brings nothing like we’re seeing today. 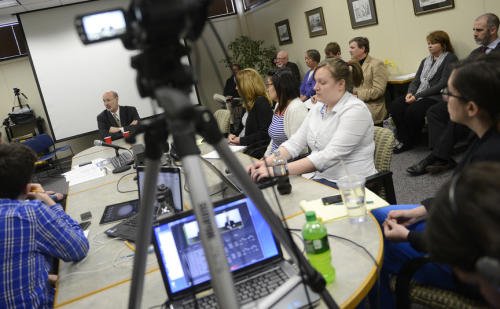 Mark worked at The York Dispatch for more than a decade and knows York County well. But as an AP writer, he keeps the state – and nation – in mind in going about his work.

Such was the case in Mark’s story: “York County becomes center of Pa. political world”:

One of Pennsylvania’s 67 counties is making an outsized impact on the state’s politics these days, producing a surprising result in a special election for state Senate and boasting several high-profile public officials as well as the leading Democratic contender for governor. The political influence of York County, a fast-growing area between the state Capitol and the Maryland state line, may be at its highest point since the town hosted the Second Continental Congress during the Revolutionary War.

The most recent example occurred Tuesday, when trash hauling company owner Scott Wagner, a tea party-aligned Republican, managed to pull off a long-shot write-in win in the special election in convincing fashion, a 21-percentage-point victory against the anointed GOP candidate and a Democrat.

York County, a heavily Republican area—except for York City, the county seat—includes considerable farmland, a diverse manufacturing sector and a suburban boom fueled in part by proximity to Baltimore and Harrisburg. As a fast-growing part of a stagnant state, York has seen its legislative delegation expand with the population, which is up by 39 percent since 1980 to about 435,000 people.

Its political history includes voting against Abe Lincoln in 1860 and producing one Pennsylvania governor, Democrat George Leader, who held office in the late 1950s. The county turned Republican in the 1970s and ’80s and went for Mitt Romney over Barack Obama two years ago by a margin of 60 percent to 39 percent.

In the 2012 election, Pennsylvanians elected Yorker and former Democratic state Rep. Eugene DePasquale to the post of auditor general, a job often seen as a launching pad to higher office.

Another former state representative from York County, Republican Bev Mackereth, became Gov. Tom Corbett’s secretary of public welfare in early 2013, a high-profile position at the head of a massive state agency that is at the center of the state’s debate over health care.

Yet another Yorker, Rep. Stan Saylor, is the House Republican whip, the third-ranking leadership position, and is expected to seek either the speakership or majority leader post next year, after the current speaker retires from the Legislature.

But an even bigger impact on the state’s political world has come from York businessman and former state revenue secretary Tom Wolf. In the past couple of months, he has used a largely self-funded TV campaign ad barrage to jump to a commanding polling lead in the five-person contest for the Democratic nomination for governor.

York County Commissioner Chris Reilly, a Republican, said the county’s demographic changes have been accompanied by a movement away from a behind-the-scenes style of civic engagement.

“Now you have a whole new breed of York countian who are obviously a little more tuned into the political world, a little more aggressive and willing to take risks,” Reilly said.

Philadelphia and Pittsburgh have always played the biggest role in state politics, but leaders can emerge from anywhere among the state’s 12.8 million people. The top-ranking posts in the state House and Senate, speaker and president, are held by two Republicans from Jefferson County, population 45,000.

These days, the Pittsburgh area can claim the governorship, Democratic leaders in the House and Senate and the Republican floor leader in the House. One U.S. senator is from Scranton, and the other is from Allentown. Philadelphians are notably underrepresented among the state’s political elite, an unusual and undoubtedly temporary situation.

Asked why York has been so prominent recently, DePasquale noted its population growth as well as the fact that more than a million people now live in the greater south-central Pennsylvania region.

“I’m sure when they’re strategizing about U.S. Senate races in D.C., York doesn’t come into play a lot,” he said. “But look, if you combine the populations of Lancaster, York, Dauphin, Cumberland and Adams, it’s a pretty big area.”

Corbett’s re-election might be determined by what happens in that region, and if Wolf gets the nomination, his chances will be a lot better if he can pull off an upset in his home county. But is that possible?

“If you go by the numbers historically, no,” Reilly said. “But again, look at this special election and what happened. Everybody said Scott Wagner couldn’t win.”

Also of interest:
– Here’s a list of  York countians who have achieved on the political/governmental stage.

An archived livestream of the York Daily Record’s editorial board meeting with Tom Wolf. As in several past such meetings, the YDR invited members of the public to attend.