Pennsylvania, aka Kentucky, long rifle? Well, York has a claim to it, too 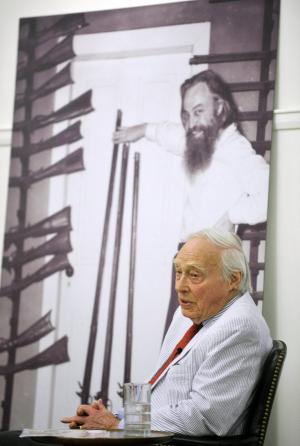 Noted antique dealer Joe Kindig III addressed an audience at the York County, Pa., Heritage Trust recently. Joe Kindig Jr., his father, is pictured in the background. The Kindig family is known for its work as antiquarians, including the Pennsylvania, or Kentucky, long rifle. Also of interest: Of York antiquarian Joe Kindig III: ‘He is generous with his knowledge’.

When I heard about Joe Kindig’s rare public appearance, the thing I hoped he would address was the Pennsylvania long rifle, aka Kentucky long rifle.

Fortunately, this expert on the rifles whose state of origin is so disputed did speak about such artifacts and ydr.com reporter Ed Mahon was there to capture his remarks in York County family known for its collection of long rifles, antiques :

Kindig said it’s not really known where the Pennsylvania long rifle, also known as a Kentucky rifle, was invented.

“Invented it was — because it was a whole new process as far as rifles were concerned,” he said.

But he said it was refined in York County.

“The very best of the rifles, fortunately, were made here in York,” he said.

There you have it, more proof that all roads lead to York, or put another way, York is the center of the universe.

More about Kindig, from the ydr.com story:

He decided to follow in the footsteps of his father, Joe Kindig Jr., in the antiques business at the age of 24.

In addition to the antique work, he also participated in many architectural preservation projects, including the Wright’s Ferry Mansion in Lancaster County. He’s also credited with playing a key role in the Golden Plough Tavern in York being restored to its Colonial roots, according to the trust.

“It was his curious nature and critical eye that noticed an unusual roof line on the tavern, and thus a superb … project was born,” said Joan Mummert, president and CEO of the York County Heritage Trust.

His daughter, Jenifer, is a partner in the antiques business, which was previously based out of York, but is now in Lancaster.

The Pennsylvania long rifle? Should have been.