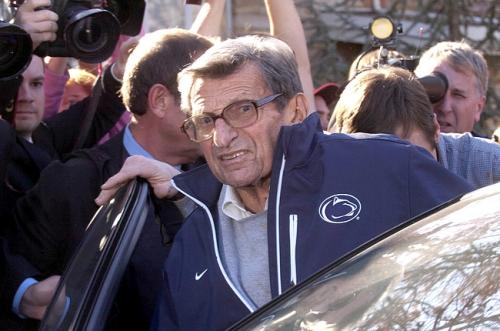 This York Daily Record/Sunday News photograph captures the scene before the resignation of Joe Paterno shortly before his departure as coach in the wake of the Penn State scandal. The photograph appears on a ydr.com website designed to tell the story and create a historical record of this terrible, evolving story. Also of interest: Joe Paterno in York County: ‘I love presidents who don’t flinch’.

The Penn State scandal is a sprawling story, and the York Daily Record/Sunday News, via ydr.com, has posted a regularly updated webpage to keep readers current.

Here’s a summary of the scandal from that site, plus a bit of local history about Penn State York:

“Former longtime Penn State assistant football coach Jerry Sandusky, known for his charitable work with at-risk children and for helping establish the school’s “Linebacker U” reputation, faces 40 charges — including involuntary deviate sexual intercourse — in Centre County, in a scandal that has ended the 46-year tenure of football coach Joe Paterno.

“Penn State athletic director Timothy Curley and the school’s senior vice president for finance and business Gary Schultz have been charged with perjury and failure to report suspected child abuse in relation to sex-abuse charges filed against Sandusky. They maintain their innocence.

“Paterno and university president Graham Spanier were fired Nov. 9 by the board of trustees. Paterno had come under harsh criticism for not taking more action in 2002 after a graduate assistant reported seeing Sandusky in the Penn State showers with a young boy. Paterno notified Curley and Schultz. Paterno is not a target of the criminal investigation.

“Curley asked to be placed on administrative leave Nov. 6 in order devote the time needed to defend himself against the allegations, according to Penn State officials.

“Schultz also stepped down Nov. 6 in order to defend himself and return to retirement, and Penn State assistant coach Mike McQueary, a key witness in the case, was placed on administrative leave, effective Nov. 11.”

A bit of history

Penn State University has been a major player in York County for years, even apart from intense fan interest in its storied football program.

It has operated a branch campus, Penn State York, that took root after World War II.

The history section of Penn State York’s website states: “After the war, returning veterans, in addition to those already in the program, brought new pressure on the University to accelerate the programs. In 1949, a one year, full-time, day technical program offering a diploma to its graduates was instituted. Penn State York dates its official beginning from this time. ”

York County has long been one of the leading counties in Pennsylvania in numbers of Penn State grads and has long played host to an active cooperative extension office.