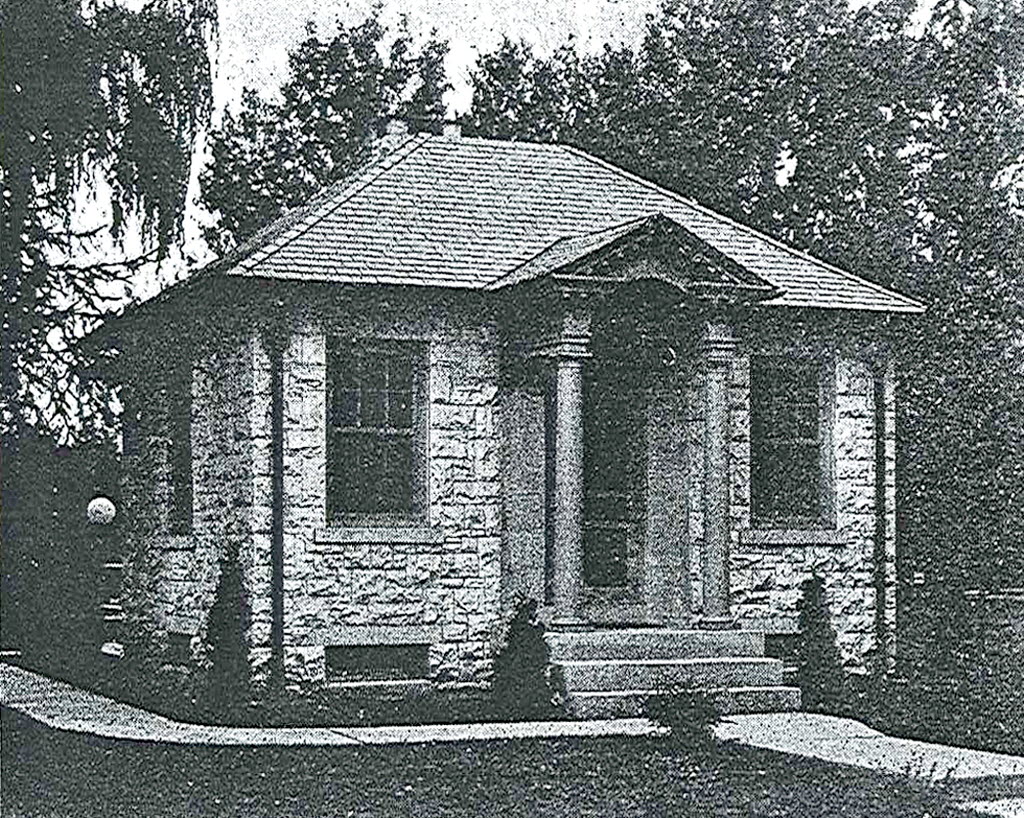 This blocky building in York, Pa.’s, Penn Park is weather beaten or, well, just beaten up. But when the Penn-Coates Memorial appeared on the cover of its dedication brochure on Sept. 25, 1926, it was a welcome sight. Also of interest: Penn Park’s Squire  Braxton and other freedmen should be remembered.

So I was preparing this week for my presentation to an OLLI class about Penn Park in the Civil War, and I remembered Gordon Freireich’s York Sunday News column from last year.

He told about an often-overlooked structure in Penn Park, which looks like it has had better days.

And it did have better days.

Among other things, the Penn-Coates Memorial served as a police outpost and comfort station in York’s first public park, which will be 200 years old in 2016.

Here’s Gordon column (9/13/12) that explains the life and times of once prominent, but anonymous building:

We have four years to prepare for the 90th anniversary of the Penn-Coates Memorial.
The what?
The Penn-Coates Memorial in Penn Park.
Ever since I can remember playing in Penn Park as a youngster, we always called the small building near the center of the park the “caretaker’s home.” Little did we know there was no caretaker for the park, let alone living in the building that would have challenged “the old lady who lived in a shoe.”
Thanks to a clipping sent to me by historian-author Dave Gulden, I found out it was called the Penn-Coates Memorial. But why?
That began my quest for an answer.
Today, the structure is boarded up and in a sad, if not deteriorating, condition. It is visible from all the streets bordering the park. Few people pay attention to it since it is overshadowed by the nearby Civil War Memorial.
When it was dedicated on Sept. 25, 1926, it certainly was an imposing, but small in stature, building with columns and bronze plaques flanking its doorway.
That means the overlooked-in-plain-sight building will celebrate its 86th anniversary this Wednesday.
I found an original program for the dedication ceremony in the files at the York County Heritage Trust’s Library and Archives.
“The Common … was secured by gift from John Penn and John R. Coates, who, by their deed dated June 11, 1816 granted … the inhabitants of the Borough of York a certain tract or lot of land containing about 20 acres … and now used as a public common,” according to the dedication pamphlet. John Penn was the last proprietary governor of Pennsylvania and John Coates was his agent. The grant also included two lots for a Potter’s Field, a burial ground for the indigent of the community. That land along College Avenue eventually became the location of the original Hannah Penn Junior High School and is now the parking lot and playground for St. Patrick’s Catholic Church.
The brochure says the concept for the building came from a group of men who did not like the “small shanty used by Patrolman Charles F. Carr” that was in the park. “It was often remarked by the Penn Commoners that the cop should have better quarters than the humble shanty.” The Penn Common Community Association was formed to fund and build a new police station and rest area for the public. The $20,000 to build and furnish the structure was secured by public subscription.
A newspaper article about the dedication ceremony noted one of the bronze plaques was dedicated “to the memory of John Penn and John R. Coates” and listed the names of the members of the officers and building committee of the Penn Common Community Association. “The other tablet commemorates soldiers of several wars who encamped on Penn Common.”
The article describes the building as “18 by 20 (feet) with basement and upper floor. It is of Georgian design. … The walls are of Cockeysville marble, backed by two courses of red brick. The interior is finished in sand cement brick of light buff tint. … Upper walls are 15 inches thick. Roof is of slate.”
The article continued, “The upper room of the building is for use as a public rest room and reading room. The police doing duty on the Common have desk and telephone in the rest room. A washstand and first aid equipment are there. The basement is equipped with a public convenience to be used under certain restrictions to be enforced by the policeman in charge.” (Back then “rest room” would have been just that, a place to rest. “Public convenience” would have been what today is called a “restroom.”)
The columns and the plaques are no longer on the building.
As often happens in York today, back then the weekend was a particularly busy one for dedications. The new YMCA on the corner of Newberry and Philadelphia streets was dedicated that weekend and in suburban York the Springetts Fire Company dedicated a new “American LaFrance apparatus” with a parade from “the Yorkshire tract and proceeding west to Rockburn street.”
With the ongoing talk about repurposing Penn Park, it would be a perfect opportunity to return “the little house” to its former glory. Perhaps in time for its 90th birthday!