Pen reportedly used for Civil War surrender linked to York County (by a thin line). Linked in to history, 1/29/13 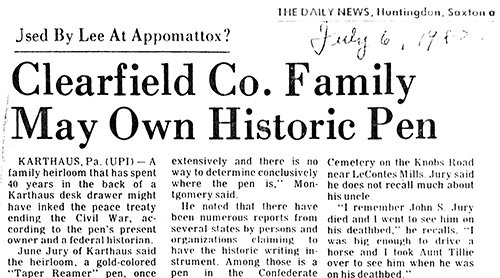 York is the center of the universe. We’ve established that. OK, some of the connections are pretty tenuous, as is this one. But it’s fun, so here goes: Some years ago, the Jury family of Clearfield County was owner of the pen that was reportedly used to sign the Confederate surrender at Appomattox Courthouse in Virginia. Lt.John S. Jury, aid to Union Gen. U.S. Grant, secured the pen and brought it home to Clearfield area, according to this story in the Huntingdon Daily News on July 6, 1982. A Smithsonian Institution official said there was a remote possibility that the pen was authentic. One account stated that an officer provided his personal pen when the one on the desk is the surrender home did not produce ink. A National Park Service spokesman was more skeptical: Many people have claimed to have the pen. Forest and Ruth Jury of Newton Hamilton, Mifflin County, were distant relatives of Lt. Jury. They visited their son and daughter-in-law, Bob and Mim Jury, in York County on occasion. Bob Jury, a longtime county resident, provided this clip about his ancestor. The story concluded: ‘Authentic or note, it still remains a family keepsake brought back by a man who served valiantly in the Civil War.’ Also of interest: ‘Shuttle Stories’ show that York County, indeed, is the center of the universe.

Some projections about the 150th anniversary  of the Battle of Gettysburg, courtesy of Gettysburg Convention & Visitors Bureau:

For a calendar of  150th commemorative events: www.gettysburgcivilwar150.com.

Quarrying in York City: Yes, and the quarry is seeking to expand. Check out: York Building Products.

Forum of the day: This 1872 building, Rescue Fire Company, No. 4, is home to artists, a nice fit for the city’s Creativity Unleashed theme. Do you think the city will succeed as a destination point for arts and other professionals?

Imagine getting pulled over by this York City Police T3 Patroller, equipped with lights and siren. This is the latest in law enforcement transportation vehicles, which started with horsepower centuries ago.