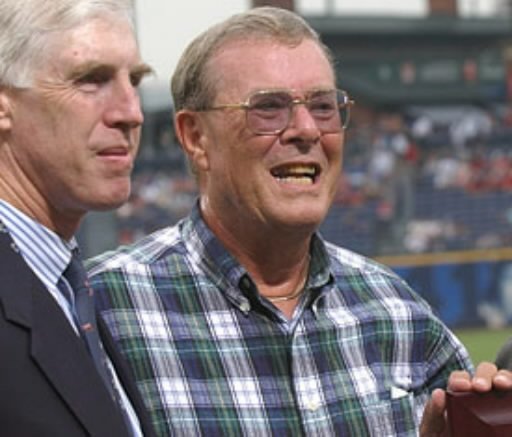 Baseball American named Snyder, who recently retired from the Braves, one of the top 25 most influential people in the game. He’s widely credited with building the Braves into one of baseball’s most successful franchises.
York Daily Record/Sunday News sports writer Frank Bodani recently wrote (3/2/08) about Paul Snyder’s retirement at the age of 72:

The Baseball Man swears it wasn’t hard to give it up in the end.
And that’s saying something, considering all the people we know, like the life-long coaches or teachers or singers who love what they do so much they can’t bear to let go — even when age begs them.
A job was so much more than just a job for them.
Of course, it was, too, for the Baseball Man, Paul Snyder. The Dallastown High graduate started in pro ball in 1957 and stayed there for 50 years as a player, scout and executive.
He is regarded as one of the best ever in the scouting business. He was deemed so valuable by his lifelong Atlanta Braves organization that officials coaxed him out of semi-retirement two years ago to work full-time again as director of baseball operations.
He didn’t say his good-byes until a couple of months ago at 72.
The thing is, he claims it really wasn’t all that difficult. And it still isn’t.
“I had a little twinge the day they were all going down (to spring training),” Snyder said. “It didn’t last long.
“I’m content.”
Understand that Snyder is one of those most responsible for the Braves’ nearly 20-year run of success.
He took over as scouting director in 1977, signed future two-time MVP Dale Murphy and began building a farm system that led the Braves to dominating the 1990s and beyond.
He had a hand in signing every major Braves’ star over a 25-year run, including Tom Glavine, Chipper Jones, Andruw Jones and Javy Lopez.
That’s why Baseball America magazine named him one of the 25 most influential people in the game over the past 25 years.
He still knew, though, when to leave it all.
He’s had a few heart surgeries over the years, including one huge scare in 2005 when a valve began leaking, making it almost impossible to breathe.
He had a stroke 30 years ago that required brain surgery — and made him learn to walk and talk and eat again.
He’s had two spinal fusion surgeries, one last summer.
So now he just wants to be able to do the things he always wanted to do with his wife, Petie.
“When you’ve been through what I’ve been through physically …,” he said. “Time was going to run out on us. I thought I better not take any (more) chances.”
Last year, during one of their typical long-distance baseball drives, Paul and Petie made a list for each other of things they still wanted to do.
They started with a trip to Mexico a few weeks ago.
“It was the first time I’ve ever been away on a vacation when I didn’t have to worry about what was going on back home. It was strange,” he said. “I wasn’t responsible for anything other than to get myself where I wanted to be because I wanted to be there.”
They will be going to the Kentucky Derby this spring. They’re planning for a journey to Ireland.
And they will have more time for simpler things.
Like daily walks around their wooded North Carolina mountain home. Or feeding and watching the deer and turkeys in their backyard.
Like spending time with their four grandchildren.
The Baseball Man picked a good time to make room for everything other than baseball.
He knows his good fortune.
A new life is opening.