Panel to explore the Confederates’ pre-Gettysburg occupation of York 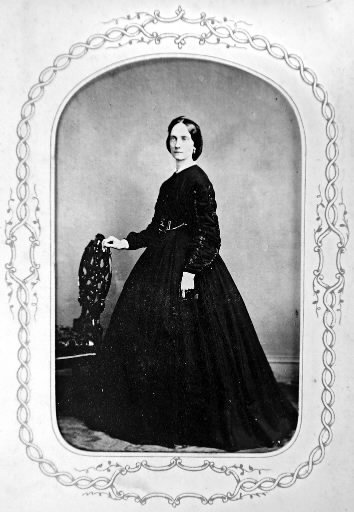 Cassandra Morris Small experienced the Confederate occupation of York in late June 1863 and wrote letters to a cousin giving an account of the horrors of the invasion. She will be among the people discussed in an upcoming panel exploring the rebel invasion. Background post: Tale of a headless soldier, Headless soldier regains its noggin and Years after Civil War, (a) Longstreet steps onto York County soil.

For years, the York area virtually ignored its Civil War history.
The wrenching surrender to the invading Confederates overshadowed the hosting of a Civil War hospital, community support of a large basic training camp and the courage of the thousands of fighting men who served and the probable hundreds who died… .

Several years ago, York City broke through this historical oversight of commission or ommission (See: Pro/Con: Should York’s leaders have surrendered to the rebels?) by launching an annual Patriots Days. That event is set again this year from June 25-28.
But this year features something new.
Perhaps even unprecedented.
A panel of authorities on the local Civil War scene will probe the various aspects of the ocupation. The local Civil War Roundtable is sponsoring the event set for 7-9 p.m., Wednesday, June 25 at the York County Heritage Trust, 250 E. Market St., York.
Scott Mingus, June Lloyd, Scott Butcher and Mark Snell will be panelists. (The first three are regular bloggers on regional history topics at www.yorkblog.com.)
I’ll moderate the discussion which will touch on the community before, during and after this shaping moment.
In the past 20 years, speakers have occasionally addressed the local roundtable and other forums on the occupation of York. But a panel discussion that is part of a city-sponsored observance of the Civil War is rare, if not unprecedented.
So those attending the forum might be witnessing a bit of history.
The following from a news release explains the Saturday, June 28, part of Patriot Days:

On Saturday, the events are held at three different locations, giving guests the option to explore history at their leisure. The fun begins with Colonial living history at the Colonial Complex at 10 am where you can learn about the History of the Conestoga wagon, along with tours of the building and demonstrations of historic games and activities. Continuing the afternoon are Firing Demonstrations, Colonial Dances, and a chance to join in on a game of Colonial “baseball.” The Colonial Complex is located at 157 West Market Street in York.
The next location where guests can continue ‘walking’ in history is at the Bonham house at 10 a.m., where you can see Civil War living history. Events scheduled are tours of the house along with demonstrations of soldier encampments and crafts. Other fun activities include traditional music, clogging, and songs and stories from the Civil War. The last stop of the day is at the Historical Society Museum and Library, where there will be clogging, and a concert and dance demonstration. The Bonham house is located at 152 East Market Street in York.
Guests can also sign up for the “Family Scavenger Hunt” to win a family prize pack including York Revolution game tickets, passes to the Strand-Capitol Theater, a family membership to the York County Heritage Trust, and a $25 gift certificate to the Trust gift shop. The scavenger hunt lasts from 10 a.mm until 4 p.m. on Saturday. Sheets will be available at all of the event locations, and they must be turned into the Historical Society Museum and Library by 5 p.m. The Historical Society Museum is located at 250 East Market Street in York.

– For more on York County and the Civil War, see East of Gettysburg on the Web.
(Photo of Cassandra Small courtesy of York County Heritage Trust.)