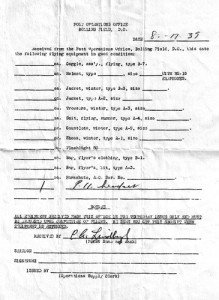 Lance Wolf has been reading a series of Yorktownsquare.com posts on Lindbergh links to York County – or perhaps the lack of such.

“Perhaps I can add one to the small list,” he wrote.

In the 1930s, Lance’s father, George, was a private first class working in the quartermaster’s office at Bolling Field near Washington, D.C.

Lance takes it from here:

“From time to time, Lindbergh would requisition items needed while flying out of Bolling Field. This was , of course, a thrill for my dad, to be issuing equipment to Charles Lindbergh.

“As time went by, my dad devised a plan to be able to prove to my mother, and others, that in a small way, he briefly associated with Lindbergh. He felt that no one would ever believe that he supplied equipment to the then very famous, Charles Lindbergh.

“Resourcefully, on one such visit with my dad, secretly, a sheet of carbon paper was slipped by dad between two requisition sheets. Dad gave the army the copy and kept the original. This requisition sheet remains in my possession today.

“Thanks to quick thinking by a PFC in the old Army Air Corps, we have proof of one small tie with York County to Lindbergh.”

Any other Lindbergh links out there?

–Barnstorming aeronauts floated in balloons over York County in 1800s.