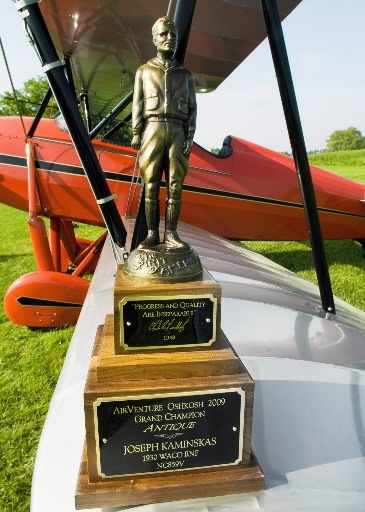 The Shue family’s Emigsville-based airplane restoration business holds one of those links – a trophy with a decided Lindbergh theme for its work in restoring a 1930 Waco plan.

OK, that’s not much of a connection. But Lindbergh was never in York County, as far as anyone knows.  So we take what we get.

And there’s the other local connection.

Here’s a York Daily Record story (4/29/1993) about that expert, Arthur Myers, which, by the way, is more proof that York County is the center of the universe:

“Arthur Myers almost had his 15 minutes of fame. Handwriting experts from around the nation descended on Trenton, N.J., in January 1935. They were called by attorneys arguing the fate of Bruno Hauptmann, the man accused of kidnapping and killing Charles Lindbergh’s baby.

“On Jan. 11, Arthur Myers, a York man who worked as a handwriting expert in Baltimore, received his call. Hauptmann’s attorney asked Myers and his partner, F.C. Malone, to examine the 14 original ransom notes to determine if Hauptmann was the author.

“After two days of studying the notes, the men announced they could not testify for the defense. Their reasons were vague, at first. But when Hauptmann’s attorney told reporters they demanded money to testify, they quickly refuted him. “The only reason we are not testifying is that our findings were not favorable to the defense,” Myers told reporters. And that was it.

“Myers returned to York. Hauptmann was convicted and executed in 1936. And Myers continued a quiet career as a handwriting expert.

“Oh, there was the occasional article in The (Baltimore) Sun which praised Myers’ mastering of the lost art of penmanship. But it was his connection to THE TRIAL that he wanted to talk about and people wanted to hear about.

“Fifty-eight years later, in fact, it is THE TRIAL that jumps out of the 95-year-old man’s obituary notice. “He had been a self-employed handwriting expert and calligrapher,” the notice reads. “His most notable handwriting analysis was in the famous Charles A. Lindbergh kidnapping case.” 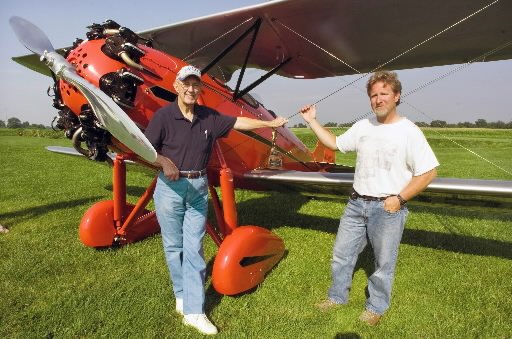 John, left, son Scott Shue are seen with the Waco plane they restored – and their trophy.