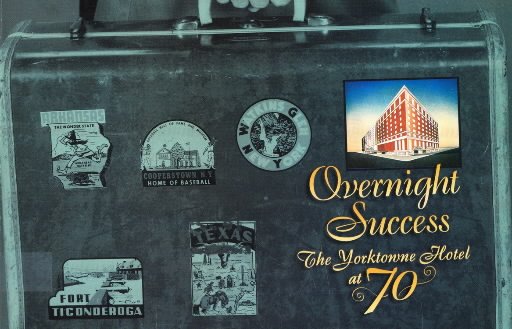 The ‘Overnight Success’ booklet marked the 70 anniversary of the Yorktowne Hotel in 1995. The financially troubled Yorktowne carries all kinds of meaning on its tall shoulders. (See back cover of this publication, available at York County libraries, below.) Also of interest: Part III: York, Pa., without the Yorktowne Hotel? Unimaginable.

Readers of this blog will remember parts of this column, which was particularly expanded from this post: The day the Ku Klux Klan cried discrimination in York, Pa.

The column, edited here, establishes the Yorktowne’s place in the York community:

People, events and ideas are bound to collide in the world’s largest small town of York, Pa.

About a month ago, I was leafing through a Human Relations Commission file to prepare for a presentation at that city organization’s 30th annual Frederick D. Holliday celebration.

And I pulled a pair of newspaper clips about the Ku Klux Klan’s attempt to book two rooms at the Yorktowne Hotel.

The Klan planned to hold its state convention at the hotel in July 1987. It booked the rooms under a false name – “Python’s Den.”

The name must have piqued the curiosity of hotel staff. Management discovered the group behind the name and canceled the reservation, citing public safety concerns.

Robed Klansmen picketed the hotel and filed a racial discrimination complaint – yes, discrimination – with the Human Relations Commission, the city agency charged with such oversight since its founding in 1974. The Klan also argued religious bias.

The Human Relations Commission saw through the claims.

The agency rejected the KKK’s complaint.

There are ironies and lessons in all of this.

For years after its founding in 1925, people of color were not permitted to lodge at the Yorktowne, although the hotel employed many black people in visible service positions.

William Myers, father-in-law of Daisy Myers, was one of those black men who worked for the hotel. And Bill Myers, husband of Daisy Myers, worked after retirement in the early 1980s for the Yorktowne.

The hotel’s management had by then lifted bans against black lodgers and diners. In fact, Voni B. Grimes, a black man who lived at the Yorktowne for five years, says integration of the hotel goes back to 1964, when an AMF employee lived there.

Imagine the thoughts of Bill and Daisy Myers if Bill and the Klan had crossed paths at the Yorktowne. Bill Myers no doubt would have stood his ground, as the Myers family did in Levittown.

Interestingly, across the street from the Yorktowne, the Lafayette Club in 1987 was a good decade away from accepting its first black member.

The Human Relations Commission would have been faced with a quandary if the KKK had sought rooms at the Lafayette Club.

And been turned down.

I thought about some of these interesting connections before the high honor of delivering my speech at the Frederick D. Holliday dinner commemorating York City School District’s first black superintendent.

The Yorktowne has progressed from a policy of barring people of color from its rooms to prohibiting a hate group from meeting there.

The hotel stands today as a metaphor for our community’s quest to shed a racist past and change for the better.

And another piece of this story.

I was speaking to an interested, mixed-race audience at that Holliday dinner.

The setting was a beautiful ballroom.

In the Yorktowne Hotel.

Joseph McClure was one of the researchers receiving credit in “Overnight Success.” He was a teenage researcher volunteering for the York County Heritage Trust when he aided in development of the book and received his first credit. Since then, he served as a proofreader of many York County Heritage Trust publications, including the first two scholarly journals. He is a copy editor for the Patriot-News in Harrisburg and a master’s student in American Studies at Penn State Harrisburg. A piece of his research there was adapted into an op ed piece in the Sunday Patriot-News over the weekend. Oh yes, he’s the son of another journalist/history guy who writes a blog and shares the same initials. Doesn’t he look like me? 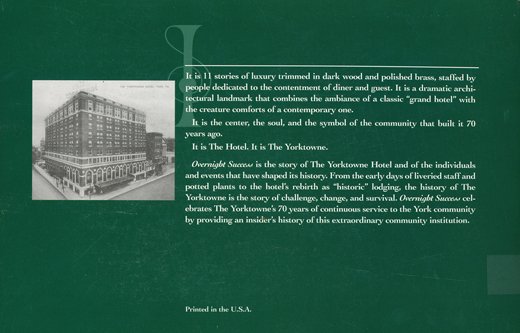 *Photo courtesy of The Patriot-News.