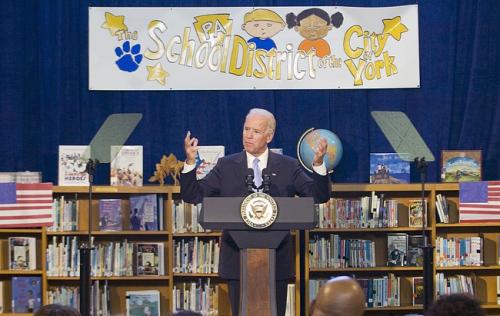 Vice President Joe Biden visited Alexander D. Goode Elementary School in this week, and the media coverage drew the usual provocative characterizations of York, Pa. Also of interest: York hardly a hardscrabble river town? and York, Pa.: No ‘rustbelt town on the banks of the Susquehanna’.

The Philadelphia Inquirer and Philly.com covered Joe Biden’s visit here this week, and came up with the following lead on its story:

“Vice President Joe Biden traveled to this aging industrial city Tuesday to tout the Obama administration’s plan to put laid off teachers back to work, stepping into an education reform debate now percolating in Pennsylvania.”

Is that an accurate description, an “aging industrial city?”

We’ve been called worse: A hard scrabble river town. A rustbelt town on the banks of the Susquehanna. Those are just wrong, of course. And they tend to forget that York’s population is just 10 percent of York County’s census, and most of the county resembles scenes from the Lancaster County-based film “Witness.”

But perhaps we should listen to these outside voices. An aging industrial city?

We tend to think of ourselves as a city that has has bottomed out, had a rebirth and is experiencing a bit of renaissance.

As someone in our newsroom pointed out, the same Philly news story  saved the hardscrabble cliche for Scranton:

“Speaking in an uncharacteristically somber tone, Biden recalled his hardscrabble upbringing in Scranton, how the family followed his father to a better job in Wilmington, and how teachers influenced him throughout his childhood.”

So, if you were an outside journalist, how would you describe York?

As I’ve said before, how about NPR’s characterization: ‘‘It’s a midsize city with an interesting history’