Part 3: How we can further disrupt discrimination in York County 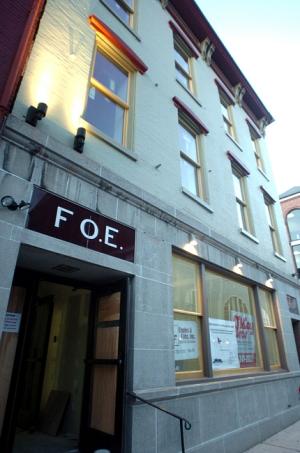 The former Fraternal Order of Eagles building on Philadelphia Street in York, Pa., now named Marketview Arts, will include space for artists and students including those from York College of Pennsylvania. The three local college’s involvement in the city will important for York City’s renaissance. Construction on Marketview Arts is slated to be finished in mid-January. Also of interest: Of York County, Pa., social clubs and virtual communities.

The evening was divided into perspectives on the past, present and future. I carved up my speech exploring York County’s attitudes toward race in the same manner.

First post, the past. Second, the present. Today, the future:

Main point: Consultant David Rusk got it right. The concentration of poverty in the city is a systemic issue that must be disrupted.

A whole new set of disruptors are needed to break this cycle – in controlled fashion.

Would another Charrette be such a disruptor (making double sure that York City’s growing Latino population is included)?

Can York College of Pennsylvania and Penn State York provide an even stronger presence in the city?

What about HACC establishing a presence in York’s downtown? Can it write into its plans to relocate there someday?

Through consolidation or other means, can suburban schools assist the city in drawing students into their classrooms where poverty has not pulled down educational expectations?

Quotable: From a York Daily Record editorial, 2006: “After his appointment as (Crispus Attucks) association executive director in 1979, Bobby Simpson spent two hours every Wednesday for about three years with ‘Doc’ Holliday. Holliday’s emphasis on community building and personal responsibility have become the hallmarks of CA under Simpson’s directorship.”

Impact: A possible disruptor of this concentration of poverty is available to all York countians: Emulate the Holliday/Simpson relationship.

Contribute one hour a week with a young person in York city or county in 2012.

In five years, hundreds – thousands – of lives will be enriched and changed.

Part I: How we can further disrupt discrimination in York County.

Part II: How we can further disrupt… .