Part III: How one spot in York County, Pa., tells much about what is going on around there 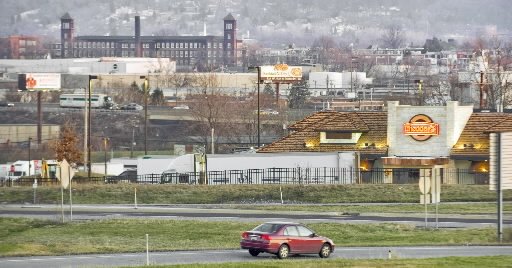 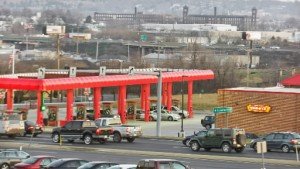 The ‘after’ photographs of the southeast corner of the Interstate 83 and Route 30 intersection, which could be considered the symbolic center of York County, Pa. Below, see the ‘before’ photographs. For a discussion on the old epicenter – Continental Square – see: ‘A 1960s view of Continental Square from the air’ and ‘The art and soul of York County from the air.’ The building with two towers in the left background is the former York Silk Manufacturing Co. Also of interest: Part I: ‘How one spot in York County, Pa., tells much about what is going on around there’ and Part II: ‘How one spot in York County, Pa. …’

For years, Continental Square in York served as the epicenter of York County. North and South (the Susquehanna Trail or George Street) met East and West (the coast-to-coast Lincoln Highway or Route 462) there. That square was York County’s market center for its first 150 years. And it was no mini-market. It served as the trading hub in one of America’s top-producing agricultural counties.

That square converted to retail to serve a growing population of factory workers from the late 1880s to the late 1950s. The post-World War II period brought the explosive growth of the suburbs and the gradual erosion of York’s downtown. Indeed, an updated highway highway system helped push and pull that symbolic center northward to the intersection of Interstate 83 and Route 30. Interstate 83 opened all the way in 1959. The York Mall went up in 1968. The Route 30 bypass poked through in 1969, and the Wright’s Ferry Bridge opened up West Bank access to the Park City Mall in 1972. The pedestrian-driven Continental Square was replaced by the motorist friendly I-83/Route 30 three-point cloverleaf. So York County has a relatively new symbolic center, and what a symbol it is, loaded with meaning and all. These photographs, taken by York Daily Record/Sunday News photographer Paul Kuehnel over several years, help unpack that symbol.
These images show, background, the dual towers of the old York Silk Manufacturing Co., book ending its single smokestack. The former maker of silk pajamas is now an apartment complex. The houses — replacing row homes for middle-class workers — came down soon after this photograph was taken.

A Sheetz Convenience Store has gone up in that former neighborhood, and a Starbucks isn’t far away. And a Cheddar’s restaurant will soon open. The photos contrast the decline of large-scale smokestack factories in the past 100 years and today’s growing York County service sector that sells convenience. As one sage has indicated with a dose of irony, a restaurant named for cheese in the county’s new center might be appropriate. It just takes us back to those agricultural roots from which York County grew. 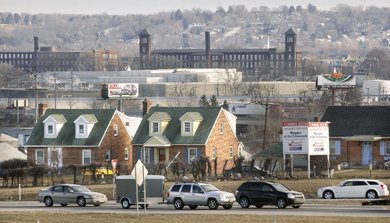 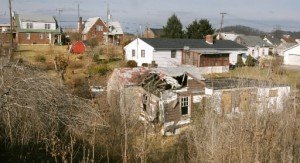 Two more posts on that neighborhood:

–Then & Now: ‘See how York County has changed…from York City to the outlying boroughs’