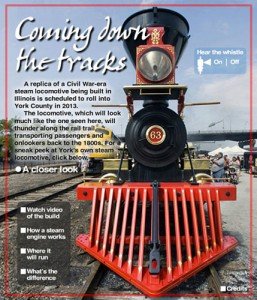 This ydr.com presentation provides a graphic lead-in to a wealth of information about a proposed oil-fired steam locomotive that will pull an excursion train between New Freedom and Hanover Junction in 2013.  Part I:  Will Steam into History Inc.’s locomotive steam … .

This project to build a locomotive for excursion use in southern York County is traveling, well, on time. (Update, 8/14/13: In fact, this ydr.com Media Center photo gallery shows it in operation.)

Here is a description from a package that appeared in the York Daily Record/Sunday News and in digital form on ydr.com, also called up mashup:

“President Abraham Lincoln traveled on a train through York County to deliver the Gettysburg Address.

“Two years from now, tourists could ride a replica of Civil War-era train to learn about York County’s role in the war, travel the historic line that once connected Baltimore and Harrisburg, and enjoy the countryside.

“The nonprofit behind the project says the train should be ready for the 150th anniversary of the Battle of Gettysburg.

“Right now, a locomotive builder in Illinois is creating the York No. 17 engine. Explore the presentation above to see how.”

And here’s how Facebook fans assessed the ydr.com project – and the proposed excursion train:

Mike Thomas  – Spectacular job by Paul Kuehnel and Teresa……great reporting! I can not wait to see this coming through Southern York County!

Rebecca A. Pittenger – When? Where? My Great gReat Uncle was William Pittenger of the Andrews Raiders fame who was involved in the Great Locomotive Chase. Please keep me informed so I can keep the rest of the family “on track”!

Shawn Lupinacci – They better get working on those tracks. 2 years will come by quickly.

Cale Leiphart – This is going to be awesome!

For more comments, go to the bottom of the mashup and give your opinion. 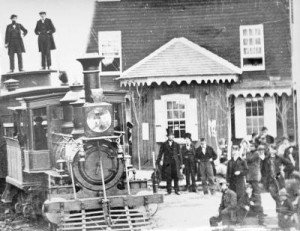 Historians disagree about whether that’s Abraham Lincoln wearing the stovepipe hat to the right of the locomotive. Lincoln changed trains on his way to and from Gettysburg, but some observers of this scene believe the man in the hat is Hanover Branch railroadman A.W. Eichelberger. The cow catcher on the York locomotive under construction will resemble this one – with horizontal bars. It is also expected to follow Lincoln’s route from New Freedom to Hanover Junction, and vice versa. But not to Hanover. Its rails and ties have long been torn up.