Part II: Recent books demonstrate York County has much history to explore, and researchers are digging into it 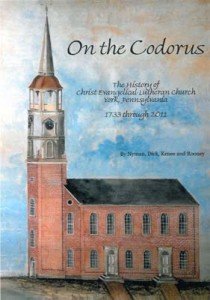 This is the cover of a new book about the mother church of York County’s Lutherans, titled ‘On the Codorus, The History of Christ Evangelical Lutheran Church York, Pennsylvania 1733 through 2011.’ A summary on the York County Heritage Trust website, where the 114 page, hard cover book is available for purchase, states: ‘Founded in 1733, Christ Lutheran Church is considered the “mother-church” of York City. This volume contains more than a building’s history, but the story of its congregation; its leaders and members and their role in the founding of York.’ Also of interest: Check out this summer reading list covering works about York County’s history and culture .

It’s an impressive number, pointing to the fact that historical research and discourse is alive and well in York County. And that doesn’t include the blogs (Scott Mingus’ Cannonball)and Facebook history discussion groups (Blake Stough’s Preserving York).

Here’s that updated list of books and pamphlets published between 2010 and March 2012, just in time to put on your summer reading list:

· Flames Beyond Gettysburg: The Confederate Expedition to the Susquehanna River, June 1863. Scott Mingus, 2011.

· The Ma and PA Remembered A History of the Maryland and Pennsylvania Railroad. Henry C. Peden, Jr. and Jack L. Shagena, Jr., 2011.

· On the Codorus: The History of Christ Evangelical Lutheran Church York, Pennsylvania 1733 through 2011. Nyman, Dick, Kenee, and Rooney, 2011.

Many, if not all of these books, are available at the York County Heritage Trust’s book shop or archives.

Also of interest:
See the previously published list, 9 recent books demonstrate York County has much history to explore … , for additional links and information about these publications.