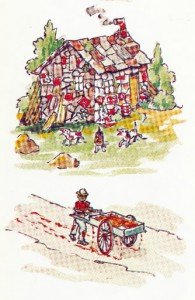 Charles Granger, widely known as Squire Braxton around York County in the 1800s, lived in an old Penn Park shanty he built of bricks, stones, mud, metal signs and bottles, among other things. He wheeled a push cart used to clean water closets – toilets – for a small fee. Edwin A. Greiman wrote about the former slave in his memoirs, which carried this illustration. Also of interest: Part I: York, Pa., town character Squire Braxton’s shack: Home to mongrel dogs, a long-barreled gun.

Or rather a Penn Park timeline by yours truly accompanying the story brought this email from Lee, an interested student of York County’s history even in retirement.

“I was elated to see that the upgrades to Penn Park are moving full steam ahead. I want to add to the historic points by Jim McClure.

“Charles Granger aka Squire Braxton was lead driver of Conestoga wagons that transported manumitted slaves from Virgina to York in 1827. Squire built a wooden structure on the northwest corner …”

Lee explained that Braxton claimed the city park as his own because that was his first stop as a free man.

Lee urged the erection of a historic marker or plaque  to memorialize Braxton and the freed slaves who became “solid citizens of York County.”

Thanks to Lee for his suggestion.

In his day, Braxton was considered a bit of a town character. But people of York thought well of the man, who  lived to be an estimated 100-plus years old.

Five hundred people attended his funeral, and a tribute to the freedman appeared on the front page of a local newspaper.

I  should point out that my timeline of Penn Park appearing here on yorktownsquare.com included the arrival of the freedman to the park in 1827. Check out: 10 memorable Civil War moments.

All black history stories from the start.