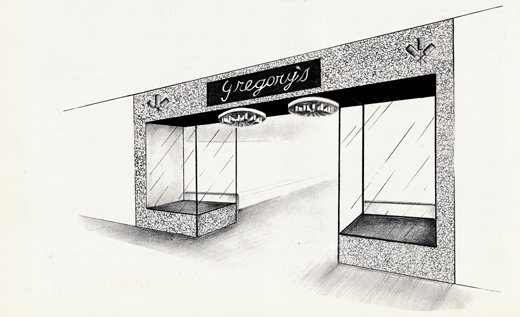 Samuel F. Gregory founded a men’s hat store on South George Street in York in 1905,and more than a century later former customers of his store are eager to share their memories. Gregory’s is long closed but kind thoughts about the store remain. This image and the one below come from the 1968 publication: ‘Greater York in Action.’ Also of interest:  ‘York, Pa.’s downtown: “This once bustling hub is becoming bustling once again” ’ and Part I: ‘Gregory’s: Old York menswear store spawns fond memories’.

After reading some of our coverage of Gregory’s memories, Gary Dutery shared some of his own memories.

Gary is a former YDR journalist plying his craft in a slightly warmer clime today – Florida.

His memories capture a piece of York’s past in such a compelling way  that I share it here for your enjoyment:

“Gregory’s place in the history of 1960s Downtown York is, for many of us,
defined by a jacket.”

“The Baracuta G9. It was a British import that carried a
price ranging from $22 to $29. It was also known as the Harrington Jacket,
after the character of Rodney Harrington – who regularly donned it on the
prime-time soap opera Peyton Place. It was also the big screen jacket of choice
for Frank Sinatra and Steve McQueen. It was the definition of cool.

“If you were male and in high school in York County in the 1960s, odds are you
owned one. Odds are you HAD to own one.

“Gregory’s was one of the few stores in the York area that sold the Baracuta or
its next of kin. The Gregory’s ‘Cuta was the genuine item, however. Ironically,
the jacket’s appeal (and authenticity) wasn’t so much on the outside, it came
from its distinctive lining. In 1938 company founders John and Isaac Miller
were given permission by the Fraser Clan chief, the 17th Lord Lovat, to use the
Fraser Tartan in the lining.

“While the overall look and feel of the jacket could be copied – and it was –
the Fraser Tartan pattern was off limits to the imitators. As a result, every
York County male under the age of 18 could instantly spot a cheap knock-off
from the real thing by the jacket’s lining. And they did. And they let you know
about it. Gregory’s sold the real deal.

“The price of a ‘Cuta’ roughly equaled a week’s worth of groceries in the mid-
60s. Getting your folks to part with this kind of money, especially when a
perfectly good jacket could readily be had for half the cost, wasn’t easy. The
jacket, they argued, was a fad they were convinced would likely be replaced
with something else in a few weeks.

“In the face of persistent nagging, parents would make the fatal mistake of
spending a far more reasonable nine dollars or so on an imitation, or ‘fake’
Baracuta. ‘It looks just like the real thing,’ they’d insist. It didn’t. Not
even close. Wrong lining, even though the average parent lacked the ability to
tell Frazer Tartan from tartar sauce. And it didn’t help that junior refused to
wear it. A fake was an invitation to public scorn, ridicule and humiliation.
The dreaded “mocking.” Or worse.

“Ultimately, after more nagging and arguing, mom and dad would reckon that going
without food for a week was a small price to pay for a brief return to a little
household harmony. Your mom was usually the first to give in. Reluctantly. The
trip to Gregory’s wasn’t entirely pleasant. If you were smart, you kept your
mouth shut. The sales clerks knew the drill. Mother plus son equals Baracuta.

“The Baracuta rack was something of a York County shrine. We would stop by and
worship there every Saturday as we plotted new tactics to use on the folks.
Nobody needed to tell you where to find it. Meanwhile, your mother would pause
at the front counter to mutter to nobody in particular something about some
jacket that carried a ‘criminal’ price tag.

” ‘Can you imagine? Nearly $30?’ ” Yeah, they could imagine. They would explain
that the jacket was an investment. Mom would explain that the jacket was a car
payment. They would talk about the Baracuta’s workmanship. Mom would talk about
how much workmanship it was going to take to pay for the thing. Meanwhile,
you’re frantically scanning the rack for the right style (the short one), the
right color (natural) and the right size (anything close was OK).

“You knew this was probably going to be your one and only shot. No going back to
the house empty-handed. You also knew that at this very moment your father was
at home fuming about ‘when I was his age’ and calculating whether there was
still time to race downtown and put a halt to this madness. The words ‘we’re
temporarily out of stock’ were a certain death sentence.

“Worse, Gregory’s carried a lower-priced line of jackets. MacGregors. You’d
heard the horror stories about clerks, seeking to salvage a sale, suggesting
“may I show you something else” as they ushered mother and son over to where
the ‘fakes’ were, naturally, in abundance. ‘Now, this is a nice jacket …’ No.
No it’s not. It’s hideous. Look at the lining! Of course, if you’d done your
job, mom had long ago lost the will to resist. She was also perilously close to
losing the will to live.

“You wanted the ‘short,’ with the distinctive collar and the stretchy-stuff
ribbing that stopped at the waist. If your peers had wiped out the inventory,
there was another model, however. A longer car coat-like thing with decorative
buckles and straps on the sides that dipped about six inches below the belt.
And no stretchy stuff. The long ‘Cuta’ was OK, but it didn’t carry the cool of
its shorter kin. And it was sort of weird. But you knew it was now or never.
You braced yourself for having to settle for the straps and buckles version.

“Color was another concern. An off-white “natural” was the first choice. Blue
meant Gregory’s had run out of natural. The average mother, now resigned to the
idea of giving Gregory’s half the mortgage money for a jacket, once again
entered the picture. The ‘Cuta couldn’t go into the washing machine. It had to
be dry cleaned. More money. Blue didn‘t show dirt. And the clerks, who were
supposed to be on your side but knew whose hands held the charge card, would
agree. It didn’t matter. The jacket, you explained, could look like a crime
scene and you’d still wear it.

“It was, ultimately, just a jacket. It was also a status symbol. The kids who
didn’t own one most likely were the kids who couldn’t afford one. Or, more
accurately, the kids whose parents couldn’t spare the cash for what was, again,
just a jacket. It was another cruelty of adolescence. Wearing a ‘Cuta didn’t
make you smarter or better looking or even more cool than the other guy. You
needed it to tread water. Not to stand out from the crowd – but to show you
were still part of the crowd.

“Baracutas stubbornly persisted, a testament of sorts to their quality. The
jackets lived on long after they were no longer all that cool. Mine lasted more
than two decades, ultimately falling victim to an impossible grease stain and a
waistline that equaled and threatened to exceed my thirty-something years. My
first born wore it a few times, but without any real enthusiasm. I’m guessing a
closet cleaning sent it to the trash or, hopefully, Goodwill.

“Prior to its demise, I donned the ’Cuta for a trip to my parents’ house one
fall afternoon. My mom noticed. ‘Is that the same jacket from back in high
school?’ It was, I replied. ‘Well, you certainly got your money’s worth from
it.’ I guess she forgot it was actually her money.

“You can still buy a Baracuta, even though Gregory’s isn’t around these days to
sell it to you. But the price isn’t $22 or $27 or whatever. You’ll spend more
than  $200 today to dress like Frank Sinatra and Steve McQueen. Which is about
what we spend each week on groceries. Nice to know some things, including the
price of 1960s York County cool, haven‘t really changed all that much.”

The Barracuta is still around. Check here to update yourself about the ‘Cuta.’

– Only in York County‘s Joan Concilio has written a ton about Gregory’s. Check out her Gregory’s selection.

–Then & Now: ‘See how York County has changed…from York City to the outlying boroughs’ 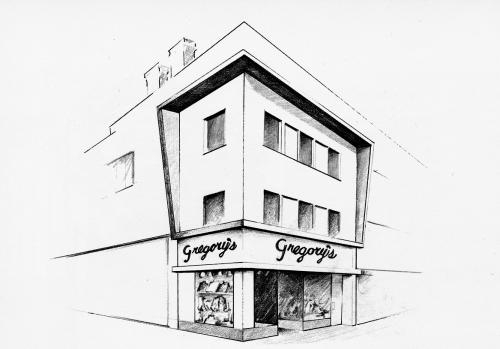