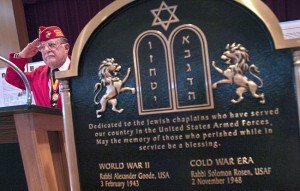 The Jewish Chaplains Monument – and the chaplains from all American wars it memoralizes – made a stop in York this week. It’s part of a 10-state, 27 venue tour covering 3,000 miles before its final resting place in Arlington National Cemetery. York, Pa.’s, Rabbi Alexander D. Goode’s name is among 14 Jewish chaplains who died in the line of duty in American wars. Here, retired Marine Anthony Stabile stands near the monument in an observance at Temple Beth Israel in York Township. Also of interest: Part I: Memorial honoring Jewish chaplains … .

Many people in York are aware of the legend of Alexander D. Goode, the rabbi and World War II chaplain who gave up his life jacket and life as the the transport ship Dorchester sank in cold North Atlantic waters in 1943.

They grew up hearing about rich memories of their hometown hero. And everyone knows about the York city elementary school named in his honor.

Betty Hirschfield remembers Goode first hand. He confirmed her in 1940.

“It took me back a lot of years to 1939 and ’40. Those were happy years,” Hirschfield told the York Daily Record/Sunday News after a service honoring the Jewish Chaplains Monument bearing Goode’s name on Friday.

Goode was a soft-spoken, loving and kind man, she recalled.

Teresa Boeckel reported those comments and more (see video, too) from the service on Friday.

She gives the full story.

Here is my skeletal report from tweets (@JamesMcClure) – observations of less than 140 characters – sent from my cell phone live via Twitter from the service at Temple Beth Israel:

– At Temple Beth Israel, Allan Dameshek says 250 American chaplains have died in war. Never would have guessed that many.

– Local chaplain monument weighs 175 pounds. Cemetery workers here to move it. Soon on its way to Arlington. Memories will live on.

– For a view of the Mural of York honoring the Four Chaplains, visit here.

– A Hollywood-production is under development about the Four Chaplains. 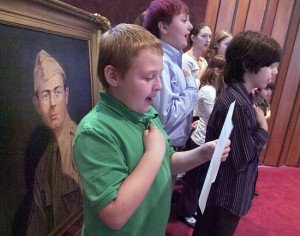 This Albert Bosshart rendering of Alexander D. Goode is in the collection of the York County Heritage Trust. It was transported to Temple Beth Israel to accompany the plaque.