Part II: From then until now, York Fair book tells about family fun since 1765 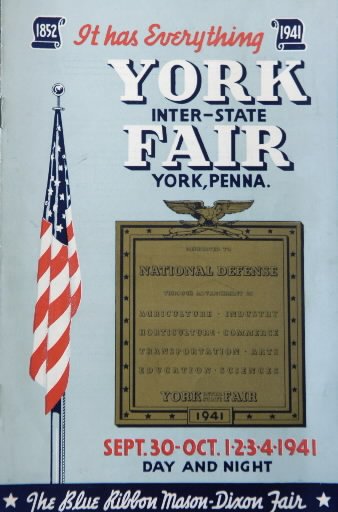 This image touts the York Fair in the days before Pearl Harbor. Dave Gulden wrote in his “York Fair: Family Fun Since 1765” that the 1942 York Fair ended with a patriotic note. One hundred men were sworn into the armed forces in front of the grandstand. Also of interest: Part I – From Then until Now … .

Dave Gulden tells this charming York Fair story in “From Then Until Now:”

In 1888, the York Fair was opened in new, larger quarters in west York, a couple of miles from its former southeast York digs.

D.F. Stauffer, founder of D.F. Stauffer Biscuit Co. fame, was among the vendors in that first year.

“We sold everything,” Gulden wrote. ” We had a complete display of pretzels. We had machine-made and hand-made. The Nifty was the main pretzel that we made.”

Eateries in those days were centered in one building.

The pretzels and other snacks came in wooden barrels. Stauffer’s weighed it out, put it in bags and boxes and and sent customers on their way.

David E. Stauffer also weighed in on his fair favorite:

“One of the main things my wife always used to say if she wasn’t along was ‘bring me a candy apple.’ They were 25 cents when I first visited the Fair. The last ones I got were two dollars and fifty cents apiece. There’s been a lot of changes.”

York countians are proud of the York Fair, and there’s a lot to be proud about.

This is the season when Bury’s World Famous Hamburgers reigns as burger king.