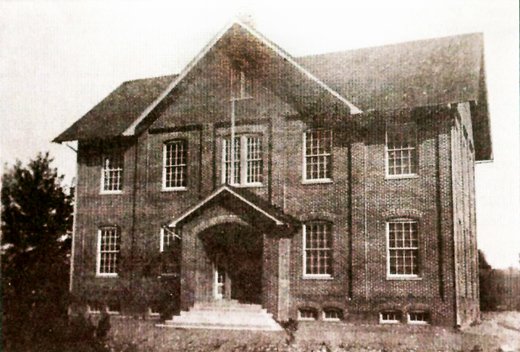 This photograph of Spry Grammar School appears on a poster promoting the upcoming 100th anniversary reunion of  the school. The reunion is set for 3 p.m., Sept. 22, 2012, at North Hopewell-Winterstown Volunteer Fire Company. The deadline for signups is Aug. 1. For details, contact Mike Grandia, grandiamike@aol.com. ‘I am still trying to obtain the names of the teacher’s from 1912 to 1962 and the owners of the first school located at 45 School Street in Spry from 1875 to 1912,’ Mike wrote. The school stood on the present-day site of Otterbein United Methodist Church. For more background, check out: Former Spry Grammar School students still true to their school.

You might have noticed use Stephen Smith’s memories a lot on here. That’s because he has such detailed accounts of historical moments, sites and things.

“The photo from the trackside of Ma & Pa’s old Ore Valley train station brought back a memory that I regret to this day. Seeing that photo reinforced my recall of that long stonewall leading into the Ore Valley train station and wishing I had brought along a camera to capture such a wonderful picture. My recall is from a 1965 passenger train excursion on 7-miles of the Ma & Pa tracks between York and Yoe. A massive Canadian Pacific steam locomotive pulled this excursion train. This steam engine was much to heavy for trestles further to the south, therefore Yoe Station was the stop at the end of the line prior to returning to York. During 1966 and 1967, a smaller steam locomotive was utilized that allowed Ma & Pa Steam Train excursions to run all the way on the 33-miles of track between York and Delta. In 1968, I purchased my first 35-mm camera; looking forward to finally being able to take photos during one of these steam train excursions on the Ma & Pa. Just my luck, steam train excursions were canceled in 1968; never to be run again.”

Behind the scenes: I was part of a team of tweeters who covered the recent reenactment of the Battle of Devil’s Den in Gettysburg. To see how we did it, check out:  The 4 Tweeters became war correspondents in a manner of tweeting.

Forum of the day:  Gordon Freireich, York Sunday News columnist, believes signage is lacking in quantity and in descriptions along York-area’s main highway. Agree or disagree? Comment below. Background see: I’d like to buy an adjective for York’s signs .