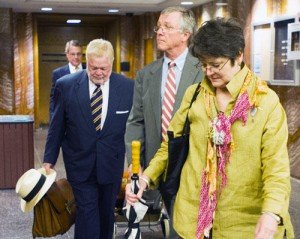 Stephen Stetler, York city’s former state rep and former state revenue secretary, enters the courtroom at the Dauphin County Courthouse Monday on the first day of his trial on charges of political corruption this week. Over the years, York County and its residents have been part of many big-time civil and criminal trials. Also of interest: Part I: · Part I: For years, York countians part of major court cases.

Steve Stetler’s political corruption trial prompted the York Daily Record/Sunday News to look at other high-profile cases involving elected and appointed officials in the past 30 years.

Here is journalist Ed Mahon’s story, based on YDR/YSN archives and court documents:

An investigation by the FBI and the state police led to federal indictments in March 1980, filed against the York County Democratic Committee, four top Democratic figures and a local physician. Prosecutors said they conspired to extort thousands of dollars in a kickback scheme. They each maintained their innocence on the charges against them. The indictments led to three trials that ended with a verdict and two mistrials.

— Separately, Leppo was charged with extorting $800 from a Harrisburg architectural firm hired to design the York County Prison in 1976. The first trial on those charges ended with a mistrial. In the second trial, a federal jury convicted Leppo of extorting $300 from architects of a new county jail by asking a member of the firm for “some vacation money.” But they acquitted him on charges that he extorted a $500 campaign contribution from the firm. He was sentenced to three months in federal prison and two years’ probation.

— The York County Democratic Committee and Jack M. Bentivegna, the committee’s former finance chairman, were charged with extorting $2,000 from the firm that designed the York County Prison — and they were accused of conspiring to extort more than $20,000 from the same firm.

They were found guilty on a single count of conspiracy to extort, but acquitted on an extortion charge. The committee was fined $200. Bentivegna was sentenced to two years’ probation and ordered to pay a $5,000 fine.. Those convictions came at the end of second trial on those charges — the first one on those charges ended in a mistrial when jurors read a newspaper story about a mistrial for Leppo.

John Norris faced legal battles during and after his tenure as York County’s recorder of deeds. But he did not face any criminal charges.

Recorders of deeds, at one time, were allowed to take commissions from the property transfer taxes paid to their offices, according to court records. But county commissioners said the practice was no longer legal when Norris was doing it. Norris, who took office in 1978, disagreed, saying that he had the permission of the commissioners and controllers when he first started receiving the commissions.

In 1986, a common pleas court judge ordered him to no longer take commissions, but it was unresolved whether he was supposed to repay the $60,000 in fees he had already collected.

He was never charged with a crime. In 1993, after he had left office, a judge ordered Norris to repay $52,500 he kept from the commissions during his three terms in office.

In a separate issue, the state Department of Revenue in 1986 imposed a fine of about $364,000 for turning in late monthly reports. In 1990, the department slapped Norris with more penalties, totaling about $402,000 for late payments in 1986 and 1987. But a May 1993 Commonwealth Court decision struck down those penalties and interest from them.

In 2001, former police officer and then-York Mayor Charlie Robertson was charged with murder in the death of Lillie Belle Allen, a 27-year-old black woman shot and killed in York during the race riots of 1969.

A jury acquitted Robertson in October 2002, but convicted two others of second-degree murder. Seven others pleaded to lesser charges.

In September 1997, the state attorney’s general office charged then-state Sen. Dan Delp, R-Manchester Township, with patronizing prostitutes, furnishing alcohol to a minor and theft by deception. The charges stemmed from a statewide grand jury investigation into prostitution at the former Platinum Escorts in Hellam Township.

Delp did not seek another term. In June 1998, he pleaded guilty to the prostitution and alcohol charges. Prosecutors withdrew the theft charge.

A Dauphin County judge ordered Delp to serve two years’ probation, observe a 9 p.m. curfew for the first year, pay a $4,000 fine, serve 400 hours of community service and write “an apology to the citizens of York County for what is clearly a violation of your oath of office.”

Years before Stephen D. Rambler successfully ran to become the mayor of Wrightsville, the United States Postal Inspection Service charged him with soliciting sexually explicit photographs through swinger magazines, then demanding $50 from responders to keep him from publicizing the pictures.

Rambler pleaded guilty in 1996 to a federal felony charge of “mailing extortionate communications,” and a U.S. district judge sentenced him to two years’ probation and ordered him to pay a $550 fine.

He became mayor of Wrightsville in 2006. But he was ousted from office in 2008, when a York County judge determined Rambler’s previous extortion conviction was an “infamous crime” preventing him from holding office. The Pennsylvania Supreme Court later upheld the decision.

Also of interest:
Check out this interactive timeline of the Stetler case.