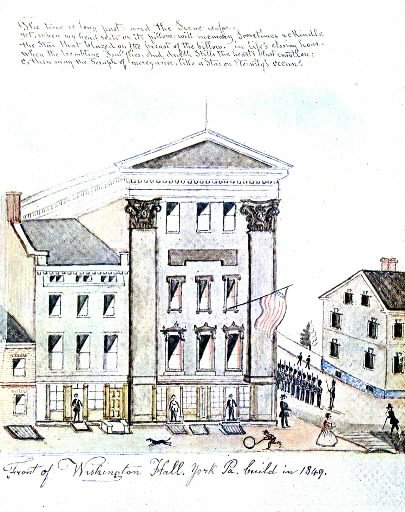 This image, drawn by noted 19th-century York artist Lewis Miller,  shows the front facade of Washington Hall. The building served as an entertainment venue and IOOF Lodge, among other uses. Today, it houses apartments. It also houses overflow from the U.S. Army General Hospital in the Civil War. After the Battle of Gettysburg, military physicians treated 25 wounded Confederate soldiers there. When Washington Hall was completed in 1849, it was part of boom of new ‘skyscrapers’ in York. William C. Goodridge and John Hartman built tall buildings on corners of York’s Centre Square in the late 1840s. Miller image courtesy of York County Heritage Trust. Also of interest:‘Skyscrapers’ have shaped York’s skyline since 1850 and Once pulled down, York’s market sheds won’t go back up.

An earlier yorktownsquare.com post (Part I: York County hosted 3 military prisoner-of-war camps)  put up the notion that we’ve overlooked a POW camp in our past.

When wounded Confederate soldiers came here after the Battle of Gettysburg, they were treated at a military post – the U.S. Army General Hospital operating in York.

Here’s additional explanation of this from my recent York Sunday News column:

Henry Palmer was serving as surgeon in charge of York’s U.S. Army Military Hospital in the aftermath of the Battle of Gettysburg.

Palmer had just escaped from Confederate custody in Gettysburg and was confronted with treating the rebel wounded from that battle at his Penn Park hospital.

Here’s how I explained how that was resolved in “East of Gettysburg”:

“The surgeon, Cassandra Small contended, would resign rather than treat rebel wounded, at least that’s what he said.

“But military officials at the field sent about 25 wounded rebel soldiers from a North Carolina regiment to York and quartered them in Washington Hall, the entertainment hall that took overflow patients.

Check out these stories and images on Yorktownsquare.com about the Civil War in York County.