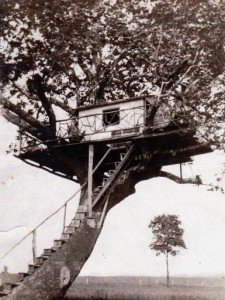 This is an unusual view of the Brook Leaf Love Nest, courtesy of York resident Dick Wilson. The honeymoon site, shown here in 1945, was constructed on the Howard Emig Farm in Hellam Township along Kreutz Creek. Two boys mugging for the photographer can be seen at the far left of the platform. (See another Love Nest view below.) Part I: Brook Leaf Love Nest… .

But this is a day of wedding trips to faraway beaches.

In less affluent times – like in times of war – honeymoon trips were less ambitious.

Or perhaps people just preferred that venue, and then they would have a honeymoon story to talk about for years.

All this taken into consideration, I wanted to know more when a longtime contact, Dick Wilson, pointed out that he knows someone who honeymooned there before its demise via fire in the mid-1940s.

This seemed like a story York Sunday News columnist Mike Argento would have fun with… .

And he did, as the following Argento column indicates:

“It was almost a foregone conclusion that Mary Ann Grimm would marry Jimmy Wolf.

“His real name was Lavere Sterling Wolf, but everybody called him Jimmy. Mary Ann’s not sure why, except it was more suited for a country boy growing up in Hallam and the surrounding countryside.

“He and Mary Ann were friends going way back, almost to the cradle. All the kids in Hallam knew each other, and they all ran in the same crowd, playing kid games like tag and hide-and-seek and just goofing around. They went to school together, first at the Hellam grade school and then the high school.

“Jimmy came to live with Mary Ann’s family when he was a kid. His father had been drafted, and when he went into the service, he left Jimmy in the care of Mary Ann’s family. Jimmy had no place else to go. His mother had run off with another man, was divorced and was re-married in California. It was quite scandalous back then — we’re talking 70-some years ago. Now, it would have been normal for Jimmy to move out to the coast and live with his mother. Then, not so much. It was just the way things were.

“Jimmy fit right in with Mary Ann and her brother and sister. They were like family.

“Later, in high school, he and Mary Ann became a couple. Jimmy and another boy used to come to her house to visit, but at one point, Jimmy told the other boy to stay away, that Mary Ann was his girl.

“They graduated from high school in May 1944, and the following February, just about two months after he turned 18, Jimmy was drafted and sent to Europe to fight as World War II wound down. He was wounded in Germany and almost lost a leg. The doctors, instead, put a metal plate in his knee, and sent him home for a month’s leave.

“When he came home, he and Mary Ann got married. It was a good time, as good as any. His father was home on leave, as was Mary Ann’s sister. The family was there and Jimmy might be going back to war. The time was right.

“They didn’t have money for a honeymoon and, besides, Jimmy’s time at home was short.

“So they spent a week in the Love Nest.

“It was a strange building, a kind of elaborate tree house on the Emig farm, right by Kreutz Creek, near the old railroad station and the furniture factory on the south side of town. The guy who owned it was Howard Emig, whose son, Albert, went into the service at the same time as Jimmy. Albert, though, never came home.

“The house was built over three months in 1921 after Howard and a brother and cousin got the idea to build it in the crook of a large Sycamore tree with a swayback trunk that overlooked the creek. The staircase to the treehouse was cut into the curved trunk, leading to a deck and small shack, entwined in the tree’s lowest limbs. The house had windows and doors and electrical service. It was like a regular house, albeit in a tree.

“The treehouse earned its name by virtue of its destination as a honeymoon site, the Emigs renting the house out to newlyweds. The house was kind of a roadside attraction, featured on postcards and in the newspapers. A 20th Century Fox crew filmed a news reel there, recruiting students from York High to dance on its deck.

“Mary Ann and Jimmy were allowed to spend their honeymoon week there gratis. They knew the Emigs and they were like family, and Mary Ann suspects that Howard thought of Jimmy like his son, after losing his own boy.

“Mary Ann remembers it rained almost all week, flooding the meadow below and preventing the locals from carrying out a tradition called “The Rattle Band,” where people serenaded newlyweds by gathering outside their window and banging on pots and pans.

“Mary Ann believes she and Jimmy were the last couple to spend their honeymoon in the Love Nest. Not long after, the house caught on fire. Nobody was sure exactly how it started, but the suspicion was a hobo from the nearby rail yard had camped in the house and accidentally burned it down.

“By the time Jimmy was ready to ship out, the war had ended and the Army sent him to Missoula, Mont., to stand guard at the stockade, and Mary Ann went to work at the candy counter at People’s Drugs in Red Lion, and later, on Continental Square.

“Jimmy returned home and got a job at a fertilizer plant in York. Mary Ann stopped working when they started their family. They had five children — two boys and three girls — and later, eight grandchildren and 14 great-grandchildren. Thanksgivings are noisy, but also, Mary Ann says, a lot of fun.

“Jimmy had his first heart attack when he was 53. He was taken to the Hershey Medical Center, where doctors performed a then revolutionary treatment, removing the non-functioning part of his heart. They told him he had about 18 months to live.

“He’s been gone 31 years, but it seems like yesterday to Mary Ann, now 85 and living in York with her daughter.

“She thinks about Jimmy often.

“And that week in the Love Nest.

In the late 1940s – soon after the Love Nest burned, another honeymoon spot went up up in Hellam Township. Haines Shoe House was marketed to newlyweds as well. Wonder if Mahlon Haines borrowed his Shoe House idea from the Love Nest?

For other pieces by Mike Argento, visit this ydr.com collection of his columns. 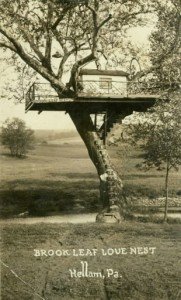 This postcard, courtesy of the York County Heritage Trust, shows a common view of the Brook Leaf Love Nest.