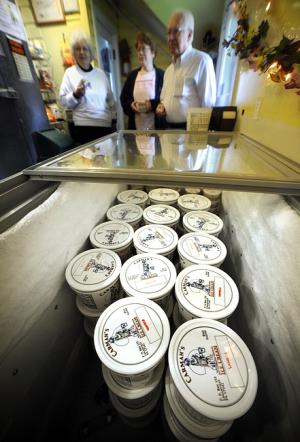 Carmen’s in Loganville is the closest ice cream maker to Seven Valleys, whose ice cream-making past is being celebrated with one of those large, noticeable Pennsylvania Historical and Museum Commission markers. Carmen’s Ice Cream is a third-generation business. Today, it sells ice cream to Maryland residents, up in Pennsylvania for Sunday afternoon drives, as did its ice cream making ancestors in the region. Also of interest: Seven Valleys – From rail to rail trail and Baltimore screamed for York County ice cream

Was Seven Valleys the site of the first commercial ice cream factory in America?

They made ice cream there, no doubt. But the first?

That’s hard to pin down, as are most such “first” claims. We would have to believe that no other ice cream makers operated on the Northern Central Railway line as it was being built from Baltimore toward York in the late 1830s until ice cream making started in Seven Valleys in 1851.

We would also have to assume that ice cream makers did not exist along any other early railway on the eastern seaboard.

It’s easy to fall prey to the claims of being the first. The First Capital assignment to York is one example of that.

I’ve probably erred that way myself on other items, but try to resist.

I liked the assessment of Charles H. Glatfelter, retired professor of history at Gettysburg College:

He said was “skeptical” of the claim that Seven Valleys had the first ice cream production plant, “but that does not mean that it’s not correct,” according to a York Daily Record/Sunday News story: Seven Valleys’ ice cream roots a well-kept ‘secret’ in York County.

Really, it would be enough to honor Seven Valleys with a marker for being a pioneering ice cream making community, which gives space for others who might claim the first-place prize.

This is the story behind the sign, as reported by the YDR/YSN:

In the 1850s, dairy distributor Jacob Fussell bought milk from York County dairy farmers and sold it to customers in his native Baltimore, according to the book “Chocolate, Strawberry and Vanilla: A history of American Ice Cream,” by Anne Funderburg.

But Fussell found he often had a surplus of cream left over, so he decided to try using it to make ice cream, already a popular treat at the time.

In 1851, Fussell decided to set up a plant in Seven Valleys, where he produced the ice cream using local dairy products to make the product, as well as ice collected from nearby streams in the winter to pack and ship the finished product via train to Baltimore to sell, according to Funderburg.

However, communication between the plant and Fussell in Baltimore was difficult, so after only two years, Fussell moved production to Baltimore, Funderburg said. But farmers realized that they could continue to make ice cream and sell it locally, leading to continued ice cream production in Seven Valleys.

The sign has now been unveiled in Seven Valleys but won’t be posted until next year so it can be displayed at the Pennsylvania Farm Show in January. 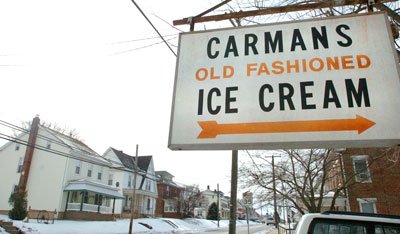 – Boy hopping a train turns into tragedy in 1886, the saddest of many Seven Valleys train accidents