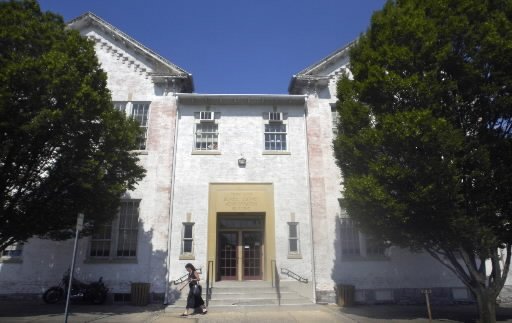 The old Cherry Street School is now the Lindbergh Education Center, a York City School District alternative school. It took its name from the nearby street, named after famed airman Charles Lindbergh in the 1920s. Also of interest: Part I: Aviator Charles Lindbergh scored links … .

So,  after a conversation with a friend about Charles Lindbergh’s links to York County, we’re on the hunt for such connections.

The late Jim Hubley provides a look at Lindbergh in his May 11, 2002, column excerpted here:

Many Americans, including Yorkers, possibly will halt their activities next week and reflect on one of the most sensational events in the history of our alleged civilized world.

It will be the 75th anniversary of Charles A. Lindbergh’s amazing solo flight between New York City and Paris, France.

It was that particular, spectacular, daring venture that opened the floodgates for the amazing rapid development of flying, making accessible to anyone on the globe any other part of our planet, even beyond our planet to the moon.

The entire nation, even most of the world, held its collective breath when the 25-year-old, tall, slim Lindbergh took off Friday, May 20, 1927, from Roosevelt Field on New York’s Long Island.

A huge crowd, despite the early hour of 7:52 a.m. (EDT), had assembled on the field wet with rain from the previous day.

For more than a week, millions of people worldwide had been anticipating the possibility that one of three air planes posed at Roosevelt Field would be taking off, their occupants risking their lives to fly for the first time non-stop from New York to Paris.

The four-man crew of the Fokker, the duo of the two-seater Columbia, and the dark horse foolhardy Lindbergh spent the first four days of that third week in May flirting with the weather and favorable flying conditions. Crowds gathered at Roosevelt Field each day, and nothing happened.

On Friday, as another large throng gathered, just after dawn the Flying Fool’s ship was observed being towed from its hangar at nearby Curtiss Field to Roosevelt Field.

The tiny monoplane had been named “Spirit of St. Louis” in honor of its financial backers from the Missouri city.

The crowd drew tense, hearts beat faster, as Lindbergh methodically checked everything again and again. He entered the cockpit at 7:40, warmed up the motor for 12 minutes, then started down the soft west-east runway at 7:52.

To the spectators, the plane appeared to be flying too low as it approached a tractor and a telephone line. Later, Lindbergh said he was in no danger, cleared the tractor by 15 feet and over the telephone wires by 20 feet. He was on his way to a glory and fame that very few humans, if any, had ever known. In 33 1/2 hours he landed in Paris, including crossing 3,610 miles of Atlantic Ocean without any radio communication system.

The world was at Lindbergh’s feet.

York, Pa., was no exception. During the flight, both York newspapers, the Gazette and Daily, predecessor to the Daily Record, and The York Dispatch, reported developments of the flight on bulletin boards in front of their offices, before crowds of citizens who overflowed into the streets.

When the landing at Paris was announced, York’s fire bells rang. It was a Saturday, and our many industrial plants were idle, their shop whistles silenced. The usual Saturday night crowds at the square were swollen by celebrants who whooped as though it were New Year’s Eve.

Prior to Lindbergh’s flight, the most important event in York that weekend had been the dedication of the new William Penn Senior High School (now undergoing repairs). The York White Roses (yes, there was a professional baseball club here) had taken first place in the N.Y.-Pa. league. (It finished third in the final standings.)

Thrilled Yorkers wanted to do something to honor the heroic aviator and did so a month later when City Council renamed Cherry Street, between College Avenue and Lafayette Street, bordering Penn Park on its eastern side, Lindbergh Avenue. There is no record that Lindbergh ever visited here.

Even as a kid I was fascinated by Lindbergh’s feat 75 years ago. I have visited the Smithsonian Air Museum several times and still look at the “Spirit of St. Louis” and say to myself, “How?”

For a flavor of Jim Hubley’s columns, access the following links that lead to his work:
– ‘We would ‘hex’ them if they ignored us’
– Giving news, sports junkies their fix
– Bury’s burgers: ‘That was it — no slaw, no relish, no pickles’.
– ‘That’s a stupid question;’ Brooksie played second base.
– Butch Wynegar ranks bright among York’s sports stars.
– York County, Pa.’s Cameron Mitchell agonized over career choice
– Playland plays nostalgic note for York countians