Part II: Rocks in the Glen turns into town where things happen 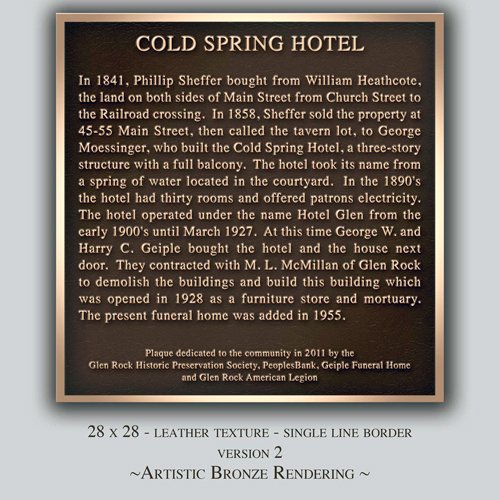 This rendering prototypes a plaque that is will be installed at the Geiple Building in Glen Rock, Pa., at 2 p.m., Sept. 18. That building stands where the Cold Spring Hotel stood in the heyday of railroading. The hotel served the railroad in this southern York County town. Also of interest: Part I: Rocks in the Glen turns into town where things happen.

The plaque tells it all: History-conscious Glen Rock is remembering the railroad that spawned its many industries with a public dedication of the Cold Spring Hotel next month.

Glen Rock and its mill (now the Glen Rock Mill Inn) prospered after the Northern Central Railway (now the rail/trail) poked through in 1838.

Passengers and railroad workers stopping over often needed a place to stay. So the Cold Spring and other such hotels cropped up along the rail line in the 1850s and afterward. Some stand today. If you see an oversized building in a small town, that might be a vestige of the days of railroading 100 years ago… .

The hotel gave way to one of those furniture store/funeral home (the craftsmenship that made fine furniture also made caskets) combos that dotted small towns throughout York County until the late 1990s.

The demolition of the hotel and growth of the Geiple enterprises in 1920s Glen Rock signaled a transition in small-town life throughout York County. Railroading was giving way to the automobile and the attendant growth in retailing.

A similar transition was taking place in the far-flung trolley system in York County in those years. Motorized buses replaced the electric-powered trolleys.

Today, footpower by rail/trail users following the old Northern Central is another step in the transportation line.

But railroading is expected to make a comeback in Glen Rock.

A steam-powered locomotive is under construction to pull an excursion train between New Freedom to the south to Hanover Junction in the north.