Part Deux: Use these stories to show off your York smarts 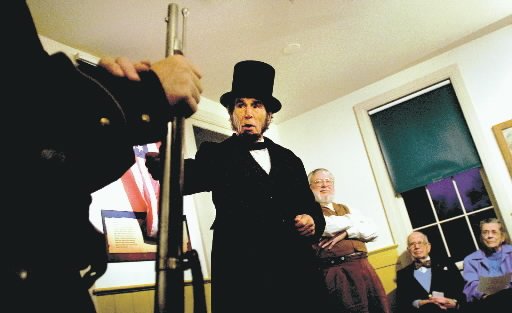 President Abraham Lincoln, played by James Hayney, speaks at the Hanover Junction train station of his trips through York County on his way to and from delivering his Gettysburg Address. Abe stopped at Hanover, too, where he spoke to an gathering. (See additional Hanover Junction photo below.) Also of interest: Part I:  Use these stories to show off your York smarts.

Five more stories to be used for speeches or to just show off around the water cooler:

A. Actually, he did. George Washington worshipped at the German Reformed Church on West Market Street in York in 1791.  “.¤.¤. I went to hear morning Service performed in the Dutch reformed Church, which, being in that language, not a word of which I understood,” he wrote. “I was in no danger of becoming a proselyte to its religion by the eloquence of the Preacher.”

Then passing through York County in 1794 after addressing the Whiskey Rebellion, the president experienced an uneasy Susquehanna River crossing:

“. . . I rode yesterday afternoon thro’ the rain from York Town to this place, and got twice in the height of it hung (and delayed by that means) on the rocks in the middle of the Susque-hanna. . .  .” Washington reportedly visited York County two other times before the American Revolution, but never during the war.

Q. How about Abraham Lincoln?

A. He never slept here, but provided brief comments, the Hanover Address, when his train paused in Hanover on his way to give a more famous speech in 1863.

“Father Abraham,”the Rev. M.J. Alleman called out, “your children want to hear you.” The president emerged from his car. “Well, you have seen me,” Lincoln said, “and according to general experience, you have seen less than you expected to see.”

Q. Did the Underground Railroad operate in York County.

A. Scores of stations no doubt aided fugitives from The South find their freedom in York County.

The federal government has certified only two after reviewing the evidence: The Willis House, now a private residence, and the William C. Goodridge House. Plans call for the latter, the residence of the prominent black businessman in the 1800s, to operate as a museum.

Q. What is the tallest building in York?

A. First, a little history:

In the late 1800s, the Colonial Hotel across the street from John Hartman’s “skyscraper,” know today as the Futer Bros. building, went up to what appeared to be eight stories. But a fire took off its Mansard roof so did that make it seven? A decade later, the Dempwolf-designed York County Courthouse came along with a 155-foot dome, possibly making that artful building the tallest. In 1925, the Yorktowne Hotel went up, measuring 11 stories. That seemed to decide the race for height for decades.

Then in 2004, the seven-story York County Judicial Center was opened. A York Daily Record/Sunday News reporter looked into its height versus the Yorktowne and wrote: “It boasts seven stories, making it the tallest building in downtown York, if you don’t count the flagpole on the Yorktowne Hotel.”

A. At least four. The first three are easy: York College of Pennsylvania, Penn State York and HACC. But Messiah College’s athletic fields sit on the York County side of the Yellow Breeches Creek, and its students receive their diplomas in Messiah’s soccer stadium on county soil. 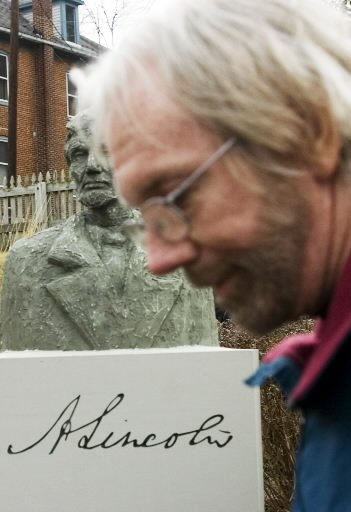 Joe Kelly is seen with his sculpture of Abraham Lincoln on the day of its unveiling, Feb. 12, 2009.