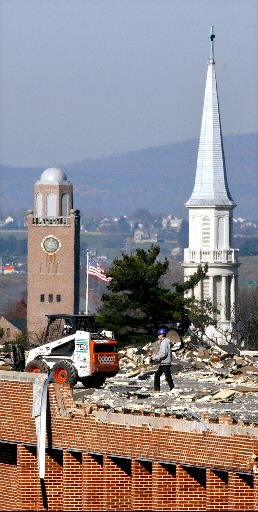 The steeples of Zion United Church of Christ, left, and St. Paul’s Lutheran Church, right, dominate the back as the old education building at York Hospital is razed in 2004. This renovation is one of many that took place on the hill, south of York, since the hospital went up there in 1930. A story about how York Hospital came to be located in that spot appears in the 2011 Journal of York County Heritage, published by the York County Heritage Trust. Also of interest: Part I: Scholarly journal feeds your sense of history and  Part II: Scholarly journal and Part III and Part IV.

The York Hospital has always been perched on that hill, south of York.

Seems like it’s always been there. But it hasn’t.

And why locate it on a hill, in the first place?

A piece in the “Journal of York County Heritage” explains much of this. Here’s a summary:

About: York Hospital’s West College Avenue site, its home for 40 years, was woefully deficient in the 1920s. It could not accommodate a growing patient load, a result of a change in practice to provide inpatient hospital care. New diagnostic and therapeutic equipment demanded more space. This story describes the changing medical landscape that ended in the building of present-day York Hospital at its current site.

Quotable: “On York Hospital’s opening day, Sept. 14, 1930, (Dr. James H.) Howard labeled the result, ‘The pride of the medical profession in all its glory!'”

Interesting point: Typical of many hospitals of its day, York Hospital was built on a hill, oriented so that prevailing winds could cool the building in warm weather and keep the air “pure.” At the time, the best thinking was that the air would flush germs from the hospital.