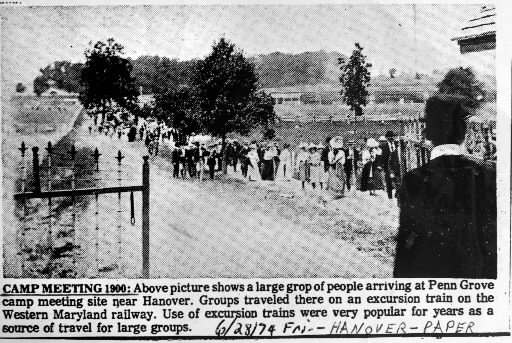 The caption for this newspaper photograph tells the story. Penn Grove Camp at Smith Station in southwestern York County attracted Billy Sunday and other popular evangelists to audiences numbering in the thousands. (See photograph below of the road, now abandoned, as it appears today.) Since 1999, the restored campground has played host to day campers and retreats for church and community groups. Background posts: Billy Graham: ‘I do remember him being here and what a thrill it was’, Retiring pastor: ‘I’ll miss the people’ and Tomb of unknown soldier in York, too.

Penn Grove Camp, host of hordes of campers in its heyday, sits somewhat forgotten in southwestern York County.
Parts of the camp have been restored (see story below), and it still operates as a day camp… .

But the story of the camp is an indicator of a way of York County life that is passing – those days of taking the family on vacation to hear Christian evangelists in a large tabernacle at night, after a full day of Bible drills, swimming and a bunch of other activities.
For my recent tour of the camp, see Abe, Gwyneth passed through Porters Sideling. Yes, Abe Lincoln passed through Smith Station, too.
The camp became popular around the turn of the 20th century, after its relocation from Emig’s Grove Camp near Manchester.
It saw a rebirth after World War II when Ralph Boyer’s York Gospel Center purchased it. Many today remember it as Camp Pamadeva.
Pamadeva. Pennsylvania. Maryland. Delaware. Virginia.
Today, some Christians continue the tradition of family camp, akin to a religious Chatauqua. For example, a popular camp in the Penn Grove mold in this area is Sandy Cove in northern Maryland.
A York Daily Record/Sunday News story (6/5/04) explains restoration efforts at the camp. 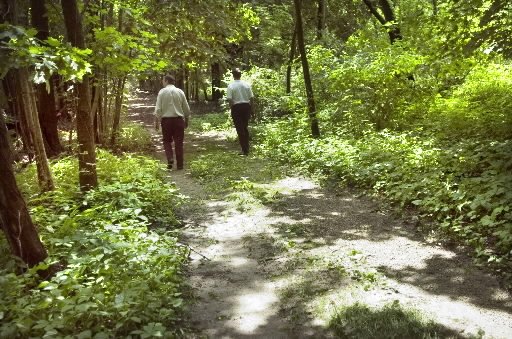 In 2004, the Rev. Fred Mummert of Harvest Time Temple and his son, Greg Mummert, the director of Penn Grove Retreat, walk the abandoned road that used to be the entrance to Penn Grove Camp until it was closed off in the 1970s and moved to Pamadeva Road. Harvest Time Temple bought the Heidelberg Township camp in 1999.