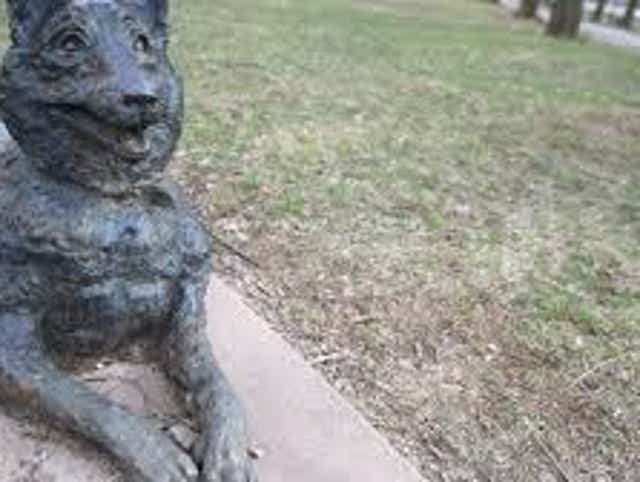 Arthur Glatfelter and Pal pose together in the lead picture of this slideshow. Pal, Glatfelter’s pet, was trained as a Marine war dog in World War II. After the war, Art Glatfelter went on to found the mammoth Glatfelter Insurance Agency.

A plaque installed last year near the statue of Pal, a member of World War II’s Dogs for Defense, answers a key question: Did the local German shepherd survive the war?

Pal was a scout, messenger, stalker and pointer in the Pacific in World War II. As such, he put his life on the line as one of 72 dogs in the 3rd Marine Dog Platoon.
The plaque says he was honorably discharged in 1946 with the rank of sergeant.
So, he did survive.
The plaque also gives a fascinating bit of information.
In three different random moments, he and his owner, Marine Sgt. Art Glatfelter were re-united.
On three different beaches.
Here’s Pal’s profile, according to sculptor Lorann Jacobs:

A plaque now tells the story of Marine Sgt. Pal, cannonized in this statue on West King Street near the rail trail in York. Background posts: Marine and his dog meet after 60 years and Rail trail ribbons criss crossing York County.