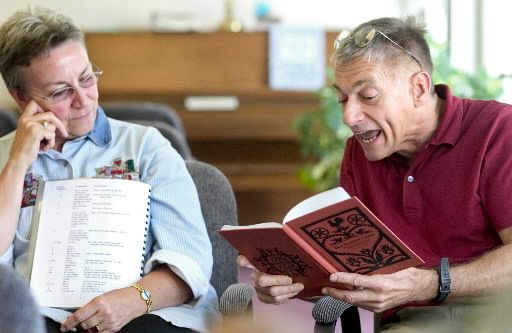 “Recapture a piece of your Pennsylvania German family history. Learn to speak with your Amish and Mennonite neighbors.”
So says a release from the Lancaster Mennonite Historical Society about an upcoming class on the Pennsylvania German language.
“Learning the ‘Dutch’ language you will better understand and appreciate the warm and colorful Pennsylvania German culture that is a hallmark of Lancaster County, in general, and of its Plain People, in particular.”
The release could have said York County, too… .

A sizable Amish population has crossed the Norman Wood Bridge in southeastern York County and made their home in that fairly isolated area.
And some non-Plain People throughout York County still speak the dialect, having grown up in homes where it was commonly spoken.
According to the release:
The society is the only educational institution in Lancaster County that offers courses in Pennsylvania German language instruction. It is one of a handful in America to offer in-class conversation with native Old Order speakers, for whom it is a living language.
The introductory class meets Wednesdays, 7-9 p.m., March 12 – May 14, and will include stories, songs, and Pennsylvania German humor.
Teacher Butch Reigart was employed for more than 35 years as a foreign language specialist for the U.S. government and speaks fluent German and Russian, as well as Pennsylvania German. This gives him an excellent understanding of the language learning process.
The intermediate/advanced class — for students with previous study or experience with Pennsylvania German – meets Thursdays, 7-9 p.m., March 13-May 15. Students will practice songs, dialogues and conversation with native Pennsylvania German speakers.
Instructor John B. Martin, a native speaker, is a schoolteacher and song-leader among the Old Order Mennonites. He is the publisher of a songbook.
Classes meet at the Society, 2215 Millstream Road, five miles east of downtown Lancaster, just off Route 30, next to Tanger Outlets, across from Starbucks.
Cost is $100 for members, $115 for nonmembers and both introductory and intermediate classes run 10 weeks.
More information is available at (717) 393-9745 or www.lmhs.org.
”