Outhouses common in York only 40 years ago: Linked in with neat York County history stuff, Dec. 4, 2011 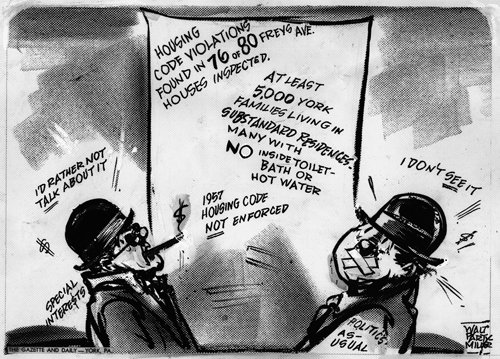 This Walt Partymiller cartoon, titled ‘But Few Care,’  is typical of those he penned for The (York, Pa.) Gazette and Daily for more than 30 years. This Jan. 23, 1968, cartoon captured the moment, indicating York City officials stonewalling against challenges by many in the York community for improving housing. This inaction contributed to race riots later in 1968 and 1969. Notice that factoid suggested that many city residents still used outhouses in the late 1960s. Indeed, the York Charrette and other reforms in the aftermath of the riots focused on improving housing. An act of God, Tropical Storm Agnes, also swept away or damage subpar housing and led to housing renewal. A reader donated this original artwork to York Daily Record/Sunday News, successor longtime publisher J.W. Gitt‘s Gazette & Daily. As with many of Partymiller’s cartoons, the artist made liberal use of whiteout, as he edited himself. Also of interest: York County readers report sightings of Cliff Satterthwaite’s paintings, drawings and How we can further disrupt racial discrimination in York County

The Red Lion Area Historical Society and the Red Lion Train Station Model Railroaders have recognized Harvey B. “Skip” Stewart’s years of service to both organizations.

Among other things, he served as president of the model railroaders for most of their 10-year existence… .

The rear warehouse room of the Red Lion Train Station is part of the recognition with a mounted bronze plaque bearing Stewart’s name. This room will house a new model railroad layout.

The station served as the hub for the Ma & Pa Railroad, a winding 77-mile line that connected York and Baltimore.

Anyone seen her? Still on the heels of the wayward woman, a cemetery marker reportedly positioned somewhere in York County. Check out her photograph.

Special day ahead: In recognition of the 70th anniversary of Pearl Harbor, the York Daily Record/Sunday News has added another oral history segment:  Remember: Pearl Harbor attack on Dec. 7, 1941.

Forum of the day, of a different type: Add your address to a map of York County holiday lights displays.