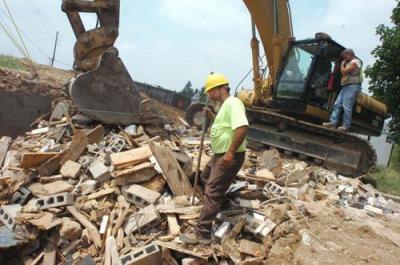 Tom Trout, worker for the contractor that demolished the Ore Valley school in June 2007, grew up a half-mile away from the school, at the corner of Springwood and Camp Betty Washington roads. ‘It’s kind of sad to see it go, but you can’t stand in the way of progress,’ he said. The passing of the school is indicative of change taking place in York Township’s Ore Valley. Background posts: One-room school memories flow from reader fingertips, One-room schools: ‘That’s when things were good.’ and Where did Camp Betty Washington Road get its name?

York Township’s Ore Valley is known to be one of the fastest-growing parts of York County.
And its growth has only just begun.
Bridgewater, a 537-unit mixed use development that could be phased in over 15 years, is moving along. It will be built on Springwood Golf Course land.
Ore Valley could someday be called Ore City.
But where did the “ore” come from in this bucolic former farming area? …

The book “A History of York Township, 1753-2003” notes that five iron mines operated in York Township in the 1800s, and four of those banks operated in what is now Ore Valley.
The most prominent was located north of the Springwood Road/Camp Betty Washington intersection.
The Schaefer family – known for its floral business – owns this site, now filled with water. It’s barely visible from the road. In fact, the landmark Schaefer house is built on a large “tailings” pile.
Some people might confuse the past ore operations with the current clay mine operated by Glen-Gery on the south side of Camp Betty Washington Road, between Mill Creek Estates Mobile Home Park and Springwood Golf Course.
The clay is used for making brick. The mine could produce clay for 50 more years, the township history states.
If so, the mine would then be the most rural part of Ore City.
Additional related posts:
– Springwood Pool and its sloping sides: ‘I remember so well how cold it was’.
– ‘Picture Memories’ booklet: York County Flood of 1933 worst of record up to that point.