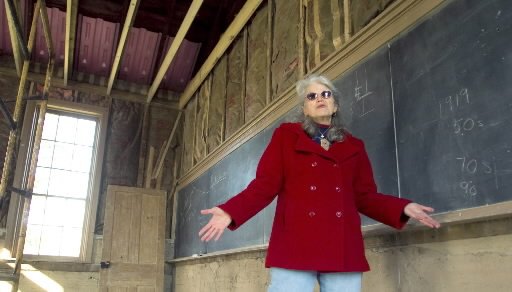 One-room schools so fascinate readers that the York Daily Record/Sunday News has set aside room on its Web site, http://www.ydr.com/schoolhouses for articles and photographs on these icons of York County.
The most recent school profiled is Wellsville’s. Here are some vital statistics about one-room schools, including Wellsville’s: … 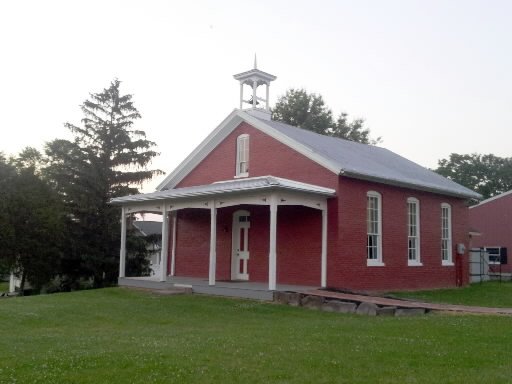 Wellsville’s one-room school, as seen from the outside. Across the street, the large stone William Wells Young Memorial School is still used by the Northern York School District.

The older boys brought their guns to school each morning and gave the bullets to their teacher for safe keeping. At the end of the day, after they learned lessons from grammar books and the Bible, the kids were given back their ammunition, which they used for hunting on the way home.
There were no concerns that the boys would use the weapons to hurt anyone. They had been taught in school to fear and respect God.
A lot has changed in public schools over the last 120 years. But as far as Judy Weber is concerned, many lessons can still be learned inside the walls of an old one-room schoolhouse. For more than two years, Weber, vice president of the Wellsville Area Historical Society, and several others have donated time, talent, materials and money to renovate a former one-room school in Northern York County School District.
Once the project is complete, society members hope to re-create history and teach today’s students what past school life was like.
Weber, who taught at Wellsville Elementary School from 1968 to 1998, never attended a one-room school. But her mother, Gertrude Slothower, had taught in one similar to the Wellsville One Room School, Weber said.
“So, my dream started a long time ago to restore it,” Weber said.
The building, according to old newspaper clippings and other information Weber found, dates to the 1890s – a time when the community behaved as one big family.
“There was so much working together. The older students helped the younger students,” Weber said.
Her research shows the school included first-through-eighth grade until about 1919, at which time it was used for school clubs including Future Farmers of America.
From about 1972 to 1992, Wellsville officials leased the building from the school district and used it as the borough’s office.
Then, it sat vacant for 13 years. The roof leaked and caused the floor to rot, she said. The society took possession of the building about two years ago.
Today, volunteers have made many repairs to the school including brick work, building a new bell tower and patching the roof.
“There’s just so many people in the community that have helped us,” Weber said. “We’re really pleased with what was accomplished in two years.”
The building still needs work, including a new porch and plaster on the interior walls, she said.
Weber said a chalkboard is in place and volunteers found four double desks in the school’s loft.
“We’re always looking for books, stick pens, inkwells, slates,” she said. “We have a pot belly stove.”
Weber’s brother, Jim Slothower of Wellsville, also helped with the renovation project.
“It’s moving along … We just set the bell tower on Wednesday,” he said.
The one-room school should serve as a good model of the past, he said. “I think it will be just like the good old days.”