York County book ‘All in One Room’ ready for readers 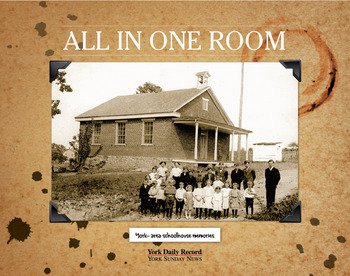 ‘All in One Room,’ a 100-page book on one-room schools in York County and beyond, is back from the printers. To order the $34.95 book, call 717-767-6397, stop by 1891 Loucks Road or York Borders or check on the Web at http://www.inyork.com/schoolhouses. Background posts: Can you name this mystery school?, No church-state separation here and One-room schools fascinate readers.
York Weekly Record editor Joan Concilio noticed the stirring of intense interest when handling print and Web stories involving one-room schools.
She created a one-room school Web section that just served to generate even more interest.
Then she floated an idea: Why don’t we do a one-room school book.
That concept became reality, and the York Daily Record/Sunday News’ “All in One Room” returned from the printers today.
And it contained the following introduction by Joan Concilio with a poignant story about John O’Keefe, who was in a one-room school most of his long life:

When we asked readers to share their memories and photos of one-room schools for a feature in the Weekly Record in late 2006, it was with the hope of finding at least a handful of pictures and maybe five or six stories to share.
As editor, my goal was to collect submissions and then pass them along to community correspondent Barb Krebs, who would contact the people who sent them and write their stories.
Imagine our surprise when we received almost 50 submissions within the first month!
We chose a few to feature in January 2007, and several readers called to thank us. Soon, the mail was overflowing with more submissions.
All told, we ran five installments of one-room schoolhouse memories in the Weekly Record and in the Hanover/Adams section of the York Sunday News.
Each time an installment ran, we received more memories and photos. The Country School Association of America, a national organization dedicated to the history of rural schools, began referring its members to our Web site to read the stories.
Simply put, the response was a great education – for the newspaper staff! We learned how much this topic means to the people of York County. And while I’m not old enough to have had the privilege to attend a one-room school, it’s been amazing to see photos submitted by my former teachers and by my friends’ parents and grandparents.
I loved taking calls from folks like John O’Keefe of Shrewsbury Township. O’Keefe called me in 2007, when he was in his 80s, to tell me that he’d been in school just about all his life. He attended the former Kratz School from first through eighth grade, from 1928 to 1936. After four years at Glen Rock High School, O’Keefe moved on – but not for long. In 1947, he and his wife, Mary, made the Kratz schoolhouse their home, and he stayed there even after Mary’s death in 2006. He still remembered the Christmas tree the family had during their first year in the home, 1947. He planted it in the yard afterward, and it grew to more than 32 feet tall by ’07.
It meant a lot to me to hear from Mr. O’Keefe. And it meant even more when I learned of his passing in January of this year. In a story published in the Daily Record after his death, daughter Judy Cline talked of that same tree, and said branches had been cut from it to lay on her father’s casket.
I owe my deep thanks to the many people who, like Mr. O’Keefe, were willing to share their stories with us. I’m grateful to Barb for her dedication in helping to pursue and document this slice of local history. And I hope that, like Mr. O’Keefe’s tree, what began as a small collection of memories can grow and warm hearts in York County and beyond.