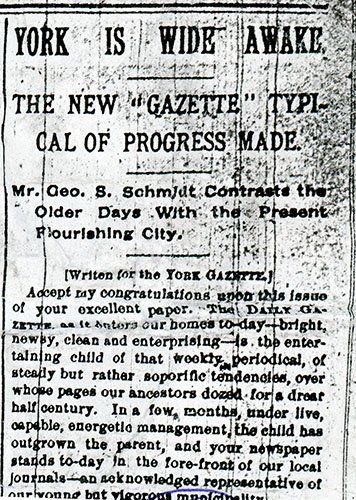 George S. Schmidt penned this essay for the York Gazette on Feb. 6, 1892, urging York, Pa., residents to wake up and inhale the spirit of progress, as one of the city’s newspapers was then doing. Industrialist A.B. Farquhar was at the helm of The Gazette, breathing new energy into the publication, founded as the German-language Die York Gazette in 1796 and the English-language York Gazette in 1815. Also of interest: Andrew Carnegie to York’s A.B. Farquhar: ‘… I am ready to go out and enjoy myself.’

Leading businessman George S. Schmidt liked the way York was heading in 1892 – five years after it had become a city.

But he felt some folks had held too firmly to the past for decades and, in fact, were still doing so.

” ‘Let well enough alone’ was a motto which we devotedly followed for a hundred years and which might well have been engraven on our borough seal,” he wrote in the daily York Gazette on Feb. 6, 1892.

He didn’t stop there.

“We lived a life as placid and contented as it was narrow and biogoted,” he wrote. “and blindly sacrificed on the altar of a mistaken conservatism every tendency toward municipal advancement.”

He would have been right at home in the Fixing York Facebook Group, where some people are known to be outspoken. 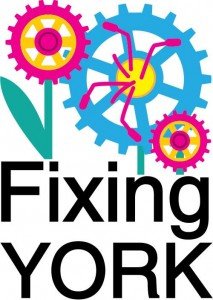 ‘Fixing York: A Community Conversation’ is set for 7 p.m., Tuesday, at Martin Library. The community-building forum is among several planned by the York Daily Record/Sunday News in upcoming months. Other events: Judicial candidate debate on Oct. 20,  FlipSide night, trauma forum involving journalists and other first responders and an opportunity to hear from – and meet – Yorkblog.com’s five local history bloggers. All are free and open to the public.

The Fixing York Group is part of a York Daily Record/Sunday News initiative by that name launched earlier this year.

The group and other parts of the initiative are designed to search for solutions to help the city – a year away from its 275th birthday – move ahead. Our writers are immersed in every neighborhood in the city in search of good ideas.

We’ve also set up a Fixing York website to collect the scores of articles we’ve written about a mix of what works and what needs work in the city.  (And that page has a pretty cool map of those neighborhoods that you should check out.)

We’re especially pleased that the Fixing York Facebook Page has turned into a rich community conversation among its 1,750 members. People post news about upcoming events. Some critique actions by city leaders. Some surface problems and ask for action.

The community has seen results: One resident pointed to lewd graffiti at Lincoln Park, and a group converged there to clean it up. A veteran asked for help in moving his refrigerator, and his request was answered. A woman wrote her building’s elevator had not worked for a day. Shortly thereafter, the elevator was again in action.

Sometimes, the discourse gets rough. Some feel that playing nice won’t get results – something that George S. Schmidt might agree with, if he were alive today.

But there’s a line, and when it’s crossed, the Fixing York community often helps regain civility by calling out such comments. And sometimes, these responders go over the line.

But in the end, group’s discourse productive and solutions oriented.

When we launched the Facebook group with the provocative name  “Fixing York” earlier this year, someone asked this smart question:

No question, a lot needs to be fixed.

But York is not broken beyond repair, any more than it was about 125 years ago when George Schmidt was writing.

Indeed, the city, particularly its downtown, often scrubs up well. An example came on a recent First Friday when sidewalks were full on West Market Street and the Market/Arts District.

George Schmidt saw goodness in York, too, in those days when York was building up in the Industrial Revolution. He pointed out that the spirit of progress could not be denied in the 1880s, and York was on the move with its city charter, a new horse-drawn trolley system, expanding boundaries and a new hotel on its square.

“Like a giant refreshed from sleep, the dear old town awoke from its slumbers, and looking over and above and beyond the miserably narrow rut in which it had so long been content to move, ‘breathed the diviner air’ of nobler, higher and broader effort,” he wrote.

Here’s believing that if George Schmidt were alive today, he would like what he would see: A dear old town that is looking over and above and beyond its problems in quest of solutions. 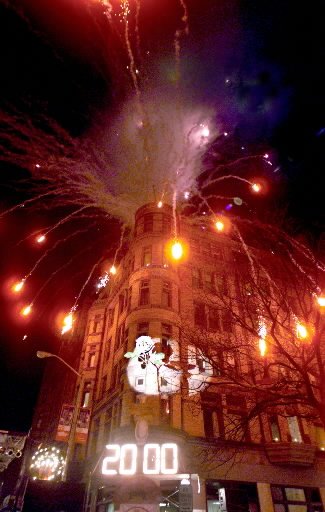 Three centuries are represented here. George Schmidt referred to the old Colonial Hotel, seen here at the start of a new century and millennium, that had gone up on Continental Square at the end of the 1800s. The hotel had been converted into offices and condos in the 20th century. This New Year’s Eve on York’s Continental Square celebrated the start of a millennium and also marked the conclusion of a year of York County 250 observances. 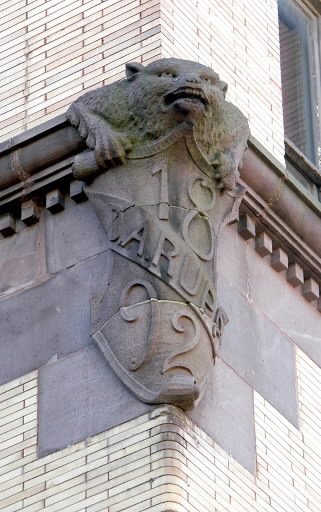