Rebel Gen. John B. Gordon’s assault at Wrightsville: ‘One of the shells found its mark’ 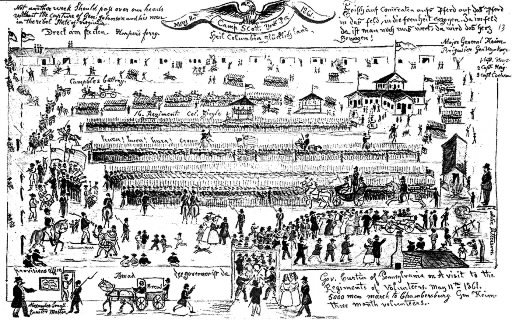 Lewis Miller captures Pennsylvania Gov. Andrew Curtin, left, standing in a carriage reviewing troops at York’s Camp Scott early in the Civil War. The camp, located at the old York Fairgrounds, South Queen and East King streets, served as a site to give green troops a little seasoning before their movement to battlefields in the South. Local residents help feed and care for the tens of thousands of troops at Camp Scott. Background post: ‘Flames Beyond Gettysburg’ research brings forth fresh facts.

“And these invaders did fill graves. They blew off the head of a black soldier in the trenches at Wrightsville.”
In my York Sunday New column Confederate flag wavers dishonor Union ancestors, I made this point and eight others to show the sacrifices of local soldiers and civilians for the North. This came in response to certain local high school students who think demonstrations of the Confederate flag are cool or a symbol to brag about or I really don’t know what they think.
Anyway, the identity of the black militiaman who died in the trenches at Wrightsville in an attempt to thwart the Confederate capture of the important covered bridge across the Susquehanna remains an unsolved mystery… .

He was with a black militia unit from Columbia that steadfastly dug trenches before the Confederate approach after white units had retired. And the black unit was there to fight when John B. Gordon’s Confederate brigade approached that Sunday evening in late-June 1863.
Maybe someday, a researcher will uncover the identity of this brave man, whose death preceded the sacrifices of the 54th Massachusetts at Fort Wagner, S.C., featured in the film “Glory”.
Here was that June 28 scene in Wrightsville, as painted in “East of Gettysburg”.

Gordon’s troops advanced slowly on the town at about 6 p.m., rising from fields of grain to pepper those in the trenches.
Then, the attackers unlimbered four cannons from W.A. Tanner’s Courtney (Virginia) battery, including two captured from Union artillerists at Winchester.
James Kerr Smith, a Hellam Street resident, counted 49 shots, both solid shot and exploding shell.
Jubal Early later wrote that the Union defenders started running on the third shot, suggesting a shorter bombardment.
Whatever the number, one of the shells found its mark, decapitating a Negro soldier in the trenches. The rebel artillerists increased their range and shot started falling in town. Some shells dropped in the river.
Others barely missed civilians.
Amanda Beaverson, crossing a street with her two children, escaped the explosion of a nearby shell without injuries.