Once the biggest and most beautiful tree in York County: Linked in with neat York County history stuff, May 2, 2012 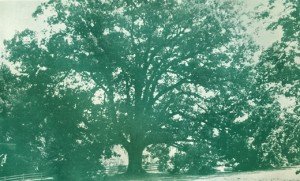 This big oak – the Seidel Oak –  stands as part of a tranquil scene in southeastern York County, captured in this Gazette and Daily calendar page for July 1969. This carefree scene contrasts with events elsewhere in York County. This calendar page was hanging on walls around the county as the 1969 race riots erupted in York City.  The caption reads: ‘The spreading chestnut tree may be a thing of the past, but  this centuries-old white oak lives on and on in its congenial location on the farm of Dr. and Mrs. W.E. Thompson, Whiteford Road, near the Constitution-Bryansville road.’ The oak won a Gazette and Daily contest in 1935 as the ‘biggest and most beautiful tree’ in York County. It was measured at 132 feet high. Does anyone know if this tree stands today? A sister oak, the May’s Oak in Emigsville, blew down in 1997. But both trees remind you of the beautiful tree on the grounds of Sovereign Bank in Spry, visible to thousands of motorists each day. (Click on image to enlarge.) Is this willow tree standing today on Powder Mill Road?

Stephen H. Smith helped us out by giving some do-it-yourself information to a commenter who asked for more southeastern York County stuff on this blog.

He commented on the post: How a bird saw the York Mall/York Shopping Center in 1971:

The York County Archives http://www.yorkcountyarchives.org/ has done a wonderful job at indexing and making a host of York County Records available, including Aerial Photos such as the above photo from the Farm Service Agency. Go to their web site, click on Records Available in the left column, scroll down and click on the second entry Aerial Photographs, click on the 1970’s County Map, click on the Southeast area of the larger York County Map that comes on the screen, from which you will be able to Download the Aerial Photo from that section of the county. Move the magnifying glass pointer and then click over that section of the map that you want to enlarge.

Notice our photo today is from that section of the county, so we’re trying.

Collectors items: A fire took out three row homes in York this week. If row homes keep succumbing to the arsonist torch and other fires, will they become an endangered species?

Route 30 the star: ‘Route 30’ movie sequel is coming to  Chambersburg, Gettysburg. The locally filmed comedy featues scenes at The Historic Round Barn, The Penn National Inn, The Cottage Pub, Old Jail House, Chambersburg, Fayetteville and Caledonia State Park. For details and tickets to the premieres, visit www.thecapitoltheatre.org or www.gettysburgmajestic.org. For details about the film, visit www.Route30too.com. Too bad, the film does cover 30 miles farther east through York County to the Susquehanna River.

Starpower from York County: Add another York countian to the list of luminaries on the silver screen: Spring Garden Township native stars in ‘Stooges’ film