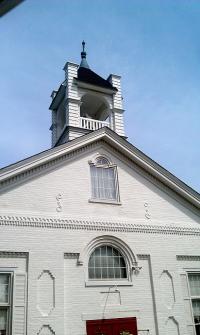 Springfield Township’s Friedensaal Evangelical Lutheran Church continues to call worshipers together by ringing a bell – a 1910 McShane – in its steeple. This is a longtime tradition in York County and elsewhere, but this practice is not on an upward swing, as YDR’s John Hilton recently wrote: ‘Church bells first appeared in northern Europe and have been around for centuries, playing a traditional role in places of worship. Historically, church bells served as timekeepers, alerting town residents to gather for significant events. Modern methods of communication have made church bells less of a necessity, and many newer church buildings forgo steeples and bells. Still, you can hear church bells in many corners of York County on Sundays.’ Read more of John’s story: Ringing the bells: Church tradition fading, but many still toll in York County . One can say that church bells were to Sunday mornings what factory whistles were to workdays; a way to order life. Also of interest: How big is that ornament atop the steeple at First Presbyterian Church in York?

An emailer from Delaware recently touted the sites along the backroads of his state and called attention to the recent book promoting the fact that Delaware is more than beaches.

I wrote him back about a fact that’s always fascinated me about Delaware:

Bill Ecenbarger in ‘Walkin’ the Line’ shows that the distance from Delaware’s circle – its western-most border – to the Susquehanna River in southeast York County is about 20 miles.

“As the crow flies. Which is a big caveat,” I wrote. “Anyway, that’s pretty amazing. Never knew you were so close.”

You could be in Delaware, sans traffic, in 30 minutes from York County. Well, maybe that’s pushing it.

“Ecenbarger’s book is excellent,” I wrote, “if you’ve never seen it.”

“The company provided parts for the Mars rover Curiosity, something the company was unaware of until they learned it from a client that worked on the project,” he wrote. ¶

” ‘It’s pretty exciting to know that some of our products are up there again,’ said company marketing director P.K. Dennis. Again? This is apparently old hat for the company. It previously provided parts for two other Mars rovers. ¶

York County, indeed, is the center of the universe.

Daily blog post of note: Universal York’s June Lloyd has a back-to-school post on a different type of vandalism – students 80 years ago tearing pages out of books.

From yorktownsquare.com’s archives: The Norman Wood Bridge fascinates because Lancaster County Amish have used it as the pathway to become York County Amish. Background: Who was Norman Wood of bridge fame?