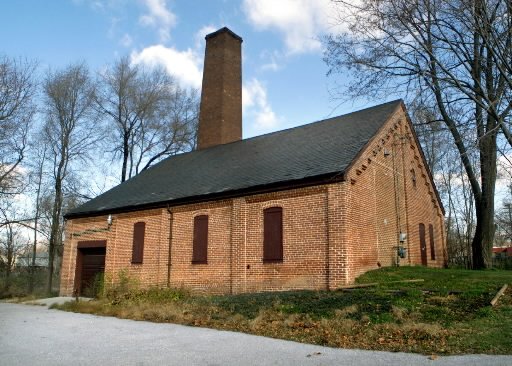 This turn-of-the-20th-century building was originally used to burn refuse from York city and York Hospital. It’s been converted into a crematorium. Also of interest: York County’s Gravity Hill, where down is up.

Last post told the story of Revolutionary War patriot Henry Laurens, apparently the first American to be officially cremated in the 1790s.
Two hundred years later, the practice is gaining visibility around York, where Laurens dwelt for nine months as president of Continental Congress in 1777-78.
In 2000, a small brick building with a large smokestack on Kings Mill Road became a crematorium.
For years, it had been rumored that the then-spooky building was originally used for burning bodies.
A 1955 newspaper article gives a glimpse at how that legend grew. As the story goes, a south-side neighborhood gang lurked around the building on Halloween night. Some gang members who peeked in a window reportedly saw a “job” under way.
Thus ended their sleep for a month… .

As it turns out, historians are uncertain that the 1897-vintage building was ever used to cremate bodies. Indeed, historians look at Prospect Hill Cemetery as an indication that cremation was not a common practice in this area through the decades.
The building might have been used to burn parts of bodies, though.
The York Hospital, located nearby on West College Avenue, used the building to burn its medical waste. The city also used the old building to burn its garbage, perhaps up to 40 tons a day between the city and hospital’s refuse.
With the new century, the John W. Keffer Funeral Home bought the building, moved in cremation equipment and got to work.
Other locations had become too busy, and Keffer was seeking an industrial area where residents did not fret about the smell of the business. Not that the crematory would emit an odor.
So, that’s how the spooky old York incinerator became a crematorium.