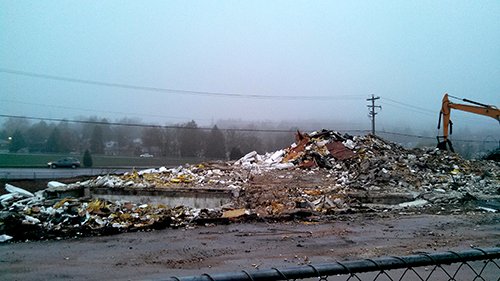 Remember Wright Bros. Lincoln/Mercury dealership standing tall at the South Queen Street/Interstate 83 intersection? Well, this was the scene Friday night. The buildings were demolished to make way for a complex featuring a Hampton Inn, a bank and other commercial interests. Red Robin restaurant was originally the marquee tenant but backed out. Site prep work is under way there nonetheless. Also of interest: Where does the York Township village of Spry start? And stop? Depends on who you ask. 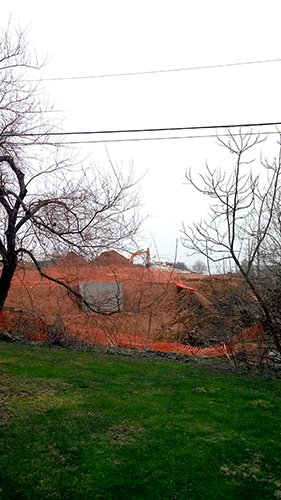 Wright Bros. , adept at marketing, drew attention in a controversy with York  Township in 2005.  Wright parked an Antonov An-2 Russian biplane that dated to the mid-1940s in its parking lot, visible from Interstate 83. The dealership eventually disassembled and removed the roadside attraction, reminiscent of York’s Shoe House and other oversized attention-getters from days gone by. 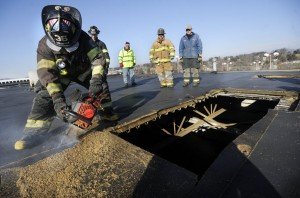 In the Wright Brothers’ dealership’s latter days, firefighters used the complex to practice their craft. As car dealerships go, Wright Bros. stood in stately fashion on the rise off South Queen Street. Its demolition suggests that automotive businesses don’t need such high-visibility sites in 2013 or that new dealerships just aren’t a growth industry today. Interesting to see what goes in there.

Pennsylvania Parks and Forests Foundation issued a fascinating release on the 80th anniversary of the Civilian Conservation Corps.

Some bullet points from the foundation about CCC:

– Who ran?: The U.S. Army ran the Civilian Conservation Corps camps, though local tradesmen usually led the work. A typical day started at 6 a.m. with breakfast at 6:30 a.m. The young men left camp at 7:15 with all of the tools needed for work that day and returned at 4 p.m. for the flag lowering ceremony and dinner. They men received three meals per day, uniforms, and $30 a month. Most of their pay, $25, was sent back to their families.

CCC results: The Civilian Conservation Corps helped to get Americans out of bread lines and into stable work.

In Pa.: Pennsylvania had the second highest number of Civilian Conservation Corps camps in the nation, second only to California.

Who qualified? The CCC workers, unmarried men between the ages of 18-25, created a legacy, building roads and structures, fighting forest fires, planting trees and creating many state parks. Their handiwork – rustic cabins, pavilions, and dams built – can still be observed by park visitors.

A sign marks the location of York County’s CCC camp – in Glen Rock.

Here’s a question you wonder about: Why does a quarry in the Hallam area look reddish. Fix York County blog gives the answer:

’42’ – The new Jackie Robinson movie “42” is in theaters. So here’s a York County tie-in, a quest for a monument to recognize Paul Stephens, a Negro Leaguer with York County ties.

Think summer: On the theme of parks, here are some posts about parks around York County: