Old Watling scale rescued from York’s HiWay Theater: It still tells your weight – and your fortune 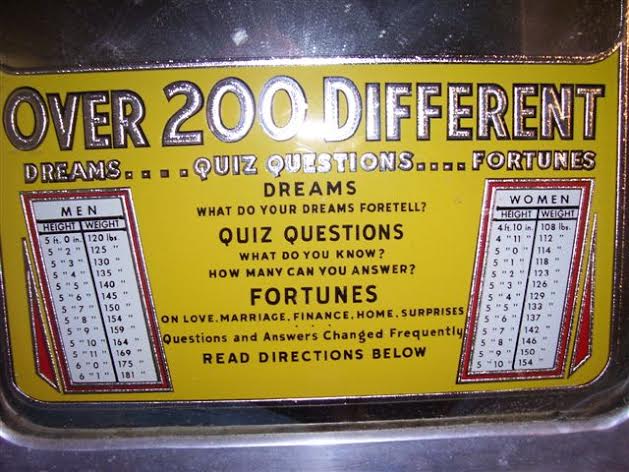 York County’s Bill Schmeer read a YorkTownSquare story in the newspaper about old West Market Street HiWay Theater, past and present. This prompted him to write about this artifact that he rescued from the old York moviehouse. It’s a scale that not only provided your weight, but also your fortune. And yes, the scale still works. More about his salvage effort below, with a full view of the old scale. Also of interest: Restored Dallas Theatre’s marquee to signal relocated business. 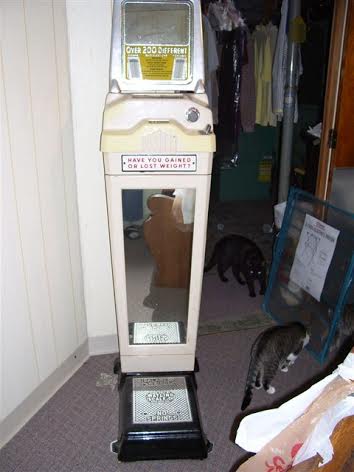 ‘When they closed the theater and were disposing of the theater’s appointments, there was an ad in the paper that there were two scales that not only gave you your weight, but had a chart on the mirror of how much you should weigh and it also told your fortune, all for only a penny. I hightailed it over to the movie house, took one look at the scale and laid out the $35. My wife’s sister and her family happened to be visiting from Niagara Falls, NY. My brother-in-law went with me. One of the scales was in the men’s room. The other was in the ladies room. We hauled them home that night. Today, the one I (bought) sits in my finished basement. The other is in my sister-in-law’s basement. The scales are balance scales, manufactured by the Watling Scale Company in Chicago. They are no longer in business. The scales are now worth in the neighborhood of $300 and both are still working.’

The Tanger Hardware building in Hanover was a southwestern York County landmark for decades.

Today, it is the new home of the Evening Sun, and the public can tour these new digs today.

An open house is planned from noon to 4 p.m. today at the 37 Broadway newsroom.

As part of the tour, you have a chance to see one of York County’s most wonderful fan-shaped windows.